The Supremes enter the Cupcake Wars:

Jack Phillips … ignited a national debate after he refused to create a wedding cake for a gay couple in 2012… [T]he nation’s highest court is now tasked with striking a balance between the religious rights of Phillips with the couple’s right to equal treatment under the law…
“This has always been about more than a cake,” David Mullins, one of the men who tried to purchase the wedding cake, said in a statement this week. “Businesses should not be allowed to violate the law* and discriminate against us because of who we are and who we love.”
Mullins’ husband, Craig, added that the two are “disappointed” that the court has continued with the case.

David Mullins is absolutely correct that this fight is about more than a cake, but it’s not about the ideals he claims. With the Gaystapo as with other minions of the Left, the issue is never the issue. The issue is always The Revolution.  In this present case, what is at question is to what extent Christians are to be forced to publicly acknowledge the rightness of sexual perversion.
While the press and even the courts have claimed that this poor couple are the victims of some sort of bigotry, it is in fact the baker who is the purposely-injured party.
Let’s look at it this way. In NYC, a humble Jewish dough puncher is asked to bake a swastika cake with the caption Six Million Birthday Wishes across the top. He is then threatened with bankruptcy via lawsuit if he refuses. Such a cake might be procured from any of a hundred nearby bakers, and yet the buyer very loudly insists that this baker make it because of who he is. Who among us would not argue that it is the cake maker being harassed?
It is the same for a black baker tasked with baking a Klan cake.
It is the same for a Muslim tasked with making a cake with a picture of Mohammad on it. 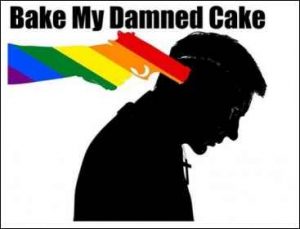 It is the same for the Christian baker.  The homosexual couple specifically chose a Christian baker because he knew the baker would find their request offensive. This case was not a single event. It was but one tactic employed in a nationwide battle — there are literally dozens of public cases in different states where a Christian was asked to bake an offensive cake and then was sued or publicly shamed for refusing.
It was never about the cake, it was always about the baker. Either the baker submitted to what he knew to be evil – in which case the couple scores a rainbow-colored feather for their cap — or they would destroy him and his family financially and emotionally as a warning to other Christians who dared to speak out against sexual disorientation.
Even though we have a ‘conservative’ court and a Republican administration, this is not a case where decency and common sense are guaranteed a win. Our own Justice Department celebrates aggressive transgenderism. Our local police cruise about in rainbow-decorated cars, and not to recall Noah’s flood, either. Our campuses and airwaves are nearly unanimous in their celebration of all manner of sexual depravity.  Our culture is in complete collapse, and I expect that no amount of politicking is going to change that.
The days are coming and are now here when each of us will be drafted into the same Cupcake Wars, though perhaps into a different arena. Each of us will be forced to take a stand. Each of us will be forced to pay a price.
For this is about more than a cake.  It’s even about more than fairness or law or discrimination. It’s ultimately about what kind of a world we will leave our children: one in which God’s designing hand is acknowledged and respected, or one in which Man is no more than an animal, driven only by chemical urges, and required by force of law to act that part.
* The reasons claimed are all the more laughable as in 2012, when the couple asked Phillips to bake them a wedding cake, the homosexual parody of marriage was still illegal in Colorado.

In the Garden of God's Word