Editor’s Note: Lector originally wrote this in 2004, but it still holds up.
The disturbing thing about time is the nasty habit it has of moving forward – perpetually. This creates all sorts of problems for those of us who’d sooner dig out a nice comfy spot that makes sense and hold out until the reinforcements arrive. See, time is a double-edged sword. On the one hand, a goodly separation from the emotion of major events gives us an excellent perspective on what really happened. On the other hand, those who don’t live through troubled times, and their solution, often completely miss the lesson. 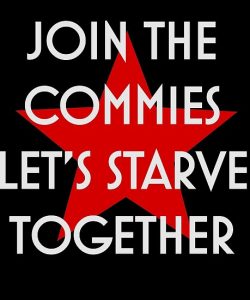 After spending some time at Will’s blog [Ed.Note: just kept this in for context]... which for some unknown reason is frequented by High School girls (You sick freak), I’ve come to a rather disconcerting conclusion. We’ve got whole generations of kids that have no idea what the cold war was about. They have no idea what communism is or was, and why it doesn’t work. They don’t remember the 80’s. They don’t remember that wall coming down. They don’t remember the USSR.
Well… how about we take the time to talk about communism, and why it doesn’t work.
First of all, communism is rooted in the belief that the most important thing in the world is fairness. Everything must be fair. That which is naturally unfair, must be controlled, and manipulated to be made fair. If anyone noticed the fascination the American Left has with fairness, and then also saw how that fascination grew in direct correlation with the democratic parties embrace of socialism, give yourself a hefty pat on the back from ol’ Lector.
At the root of all this idealism is the base idea that one man’s work shouldn’t be worth more than another man’s work. Society needs ditches as much as it needs brain surgeons, so therefore, 10 hours of ditch digging should earn a man the same amount as 10 hours of brain surgery. See? Fair.
That’s the Labor Theory of Value…. or as we Austrians say… Total Crap.
The biggest problem with the Labor Theory of Value (TC) is that it runs in direct opposition to the Law of Supply and Demand. Who remembers what happens when a “theory” contradicts a Law? Right. The paper the theory is written on is burned, and then we all piss on the ashes and feed them to the idiot that thought it was clever enough to write down.
You old timers know exactly where this is going, so if you want to spare yourself some foul imagery….
On with it then. Time to once again dispense with this idiotic Labor Theory of Value (TC). Let’s suppose I live in a communist commune. Stop laughing. Seriously. While there, I decide I need to work, so I take a big healthy crap, then painstaking sculpt my crap into the shape of my own ass. I take 20 hours to do this.
According to the Labor Theory of Value (TC), my steaming bust would be worth the same as any of the other products that the other skilled laborers produced with 20 hours of work. Swords, beds, clothes, food, music, stories, horseshoes, brain surgery… All of them… worth the exact same as my rude sculpture.
Down south we have a word for this. We call it “Stupid”.
See, the time it takes to make something is nowhere near the determining factor in it’s worth. It’s worth is determined by how much people want it, and how many “its” there are.
Communism is diametrically opposed to human nature. Capitalism depends on human nature. Time spent on rationalizing Communism is slightly more wasted than time spent inventing a perpetual motion device. Young idealists can complain all they want about how good it would be…. if only… which is rather like complaining about not being able to explore space because of that stupid gravity thing.

Hymn: "Alone With None But Thee"