Just how big should the House of Representatives be? In Article I, Section 2 of the U. S. Constitution, the Founders wrote, “The Number of Representatives shall not exceed one for every thirty Thousand, but each State shall have at Least one Representative…” Congress has been limited in size to 435 Representatives since the 1910 Census. This has caused the average district size to go from 34,437 after the 1790 Census (state population total of 3,615,925 according to the population of free persons plus 3/5 the population of slaves divided by 105 Representatives) to 710,767 after the 2010 Census (state population total of 309,183,463 divided by 435 Representatives). That’s almost a 2,064% increase. It’s no wonder Washington feels out of touch with much of the country.
Currently, there are large variations in the populations of the various Congressional districts across the country. One of Rhode Island’s districts has a population of 527,624 while Montana’s at-large district encompasses 994,416 people. That’s one district that’s 25.77% less than average size versus 39.91% more than average.
What would it look like if we were to return to a minimum district size of 30,000?

In this case, the state with the lowest district size is Vermont, with 30,016, and the largest is Wyoming, with 31,573. The average size is 30,737, and the percentage differences are 2.35% below and 2.72% above. That’s a much smaller difference, and everyone would be represented more equitably. The Electoral College would also be brought more in-line with the individual state populations. 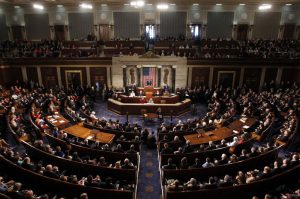 You would be a lot more likely to know your Representative and be able to speak with him or her personally on matters important to you. Instead of having to deal with hundreds of thousands of constituents, only a few tens of thousands would matter. You’d be much less likely to be represented by someone against your views. Even if you were, a nearby district would likely be more in line with your views instead of one hundreds of miles away. Your neighbor down the street might be your Representative.
How would all this work? With modern communications, not everyone has to be in the same room to hold a meeting. There could be regional capitals (and Capitols) around the country for House meetings. Votes would be conducted electronically. Debates could still be held much as they are now, with audio and video being sent around the country. Committee meetings could be held the same way. Imagine the bills that would pass if you had to corral 5,030 votes instead of 218. It would certainly be difficult to get anything extraneous passed!
One important change would be the cost to run for office. With smaller districts, it doesn’t take as much money to win a campaign. It would eliminate a lot of the money in politics. If our officials didn’t have to solicit enormous amounts of donations, there would be much less appearance of scandal or bribery. In 2012, the winners of  House races spent $734,967,300 to win their seats. If there were 10,059 Representatives, that amount of money comes out to a bit over $73,000 each. That’s well within the possibilities of a much larger group of people.
If the House were to expand like this, it would truly become a House of Representatives instead of a House of Elites.