Editor’s Note: We are pleased to present a guest post by our friend Quizzer from over at tempestinateardrop.com. Not only is he a wonderful cartoonist and humorist, but a real Man of the West. While all those appellations are true, we are sure that he places his status as a Christian at the top of the list. Hopefully, we can look forward to more of his guest posts. Enjoy the article, and then go visit his site and immerse yourself in the gloriousness of his cartoons.

The hottest gifts this Christmas season are firearms and accessories. Let’s face it, 2016 has been that kind of year. This trend will continue in 2017, because SJWs always double down. I’m not afraid to admit that I am a “gun newb.” The background check and additional paperwork required for a spork to obtain a gun are exhaustive.
Greybeards can still glean wisdom from this column. Some questions and observations are so stupid it is best to prepare in advance. Nobody trusts an expert who can’t keep a straight face when teaching safety with tools that are designed to kill.
1) Bullets don’t go in that hole on the end. Gun barrels are like one-way streets: Bad things happen if you drive the wrong direction. Ammunition has a lip around the end to prevent you from making this mistake. Don’t force bullets into your gun. There is a technical name for this feature of the shell casing, but refer to it as the “ammo safety rim” and that’ll be good enough.
2) Guns are a tool of deterrence. Part of the purpose of brandishing a weapon is to show the other person that you can, in fact, stop them. We’ve heard many reports of insane mall shooters who turn their weapons on themselves as soon as a CCW permit holder pulls a weapon of his own. With this in mind, you’ll want to decorate your gun in a way that enhances it’s lethal look. Painting unicorns or halos or googly eyeballs on your gun will make it appear more welcoming. This is an easily-avoided newb mistake. Making guns more child-friendly is not a problem that needs to be solved. There is a reason gun accessories are only available in badass, extra badass, and Chuck Norris variants.
3) Guns and ovens are a recipe for calamity. Maybe you want to bust someone out of Santa’s Antarctic dungeon, or perhaps you want a jailed family member home for the holidays. Whatever the reason, never under any circumstances bake a gun into a fruitcake and try to slip it past the guards. It will certainly need cleaning before it’ll fire safely. It’ll probably explode during the cooking process. It certainly won’t taste good, but that’s because it’s fruitcake. Besides, the guards have seen cartoons, too.
4) Do not take your gun into the shower or bath. This should go without saying, but newbies want to carry their weapon everywhere so they acclimate to it faster. If immersed, you’ll want to take the weapon apart and dry it thoroughly. If there are a couple extra pieces left over after re-assembly, don’t sweat it. Gun manufacturers put in a bunch of sophisticated-looking mechanical parts that don’t actually do anything. That’s why they sell so many extended warranties and charge exorbitant service rates.
5) Guns will fire randomly whether they hate you or not. Of all the lessons we can learn from television, this is perhaps the most important. Guns go off. Maybe it was because they thought they could get away with murder. Maybe it was because you laid it on the table safety-down, allowing it to slide into the “fire” position. Nobody knows for sure. All these instances get collated by news producers into scary-looking FBI reports. They get turned into “ripped from the headlines” crime dramas. This is why you should store your gun in a heavy-duty gun safe. Be sure and stow it with the barrel facing toward the back of the safe. It’s really embarrassing to open the door and be shot by a weapon driven mad via darkness and claustrophobia.


6) Know the laws in your local jurisdiction. We’re always reading news items about police shooting hundreds of rounds at a suspect and striking multiple bystanders before hitting the suspect once. Nothing happens to them because they are specially trained and authorized to use deadly force when warranted.
It does not work that way for you.
Depending on the jurisdiction in which the incident occurs and mood of the prosecutor, you’ll probably be sent away for a life sentence if you fire your gun wantonly at a terrorist. Especially if they are the wrong skin color. Know your local laws, and donate generously to your attorney general’s reelection campaign.
7) A special trick for Men of the West: planting watermelons. As a guest writer, I’ve snuck this little tidbit in only for menofthewest.net readers. I don’t have a lot of experience with this technique, so I consulted Mr. Survival Gardener himself, David the Good. Prepare your garden bed in advance. The easiest way is to mound up a compost heap using whatever kitchen scraps, spare dirt, and leftover Christmas wrap you can find. It’ll all decompose eventually. Place a watermelon on top. From a distance of 10 to 20 yards, use a shotgun and deliver birdshot at around 1,200 feet-per-second into the unlucky fruit. Water the leftovers if you can find them.
For extra fun, add googly eyes and a horrified expression before firing. 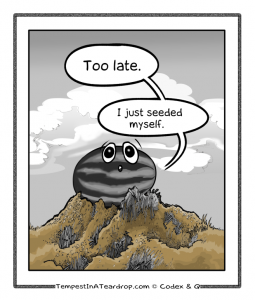 David hasn’t made a video demonstrating this technique yet, but he comes close when planting cantaloupes.

8) Correctly install all accessories. Weapons have a plethora of after-market add-ons available. These all enhance the performance of the firearm, from faster loading to pinpoint accuracy. All of them will make you look incredibly stupid if you don’t install them correctly. Read the manuals carefully and practice firing the weapon the way you want to under field conditions. Don’t have your picture plastered all over the internet because you installed your scope backwards. Especially if you are a “professional” SWAT team member.
9) Danger lurks in chat rooms. Half the fun of owning a firearm is belittling fellow weapon enthusiasts on internet chat rooms. As a newbie, you’ll want to try your hand at this. Liberal usage of terms like “stopping power”, “center mass”, and “grains” should convince enough participants that you are an expert. Combine this with insults about the male genitalia size of [brand] gun owners to generate internet points. [Brand] will usually be some variant of Glock.
It’s all fun and games until a member of a three-letter government agency enters the conversation. Don’t be fooled! They are looking for terrorists. Can you tell which of the following chat room members is the government agent?
Joe1911: “Maybe you’ll get a lucky hit, but I’d rather the bad guy stop. Now.”
FredSmithNWesson: “Some people can’t handle the kickback. Accuracy == None.”
TotallyNotAnATFAgent: “I just saw a handi-capable black jewish muslim at the local mall. Would anyone like to help teach this non-aryan his proper place? Bring your gun!”
NotTaylorSwift: “If a woman opens the top two buttons of her blouse and shows you a pair of concealed Springfield XDs, marry her.”
If you spotted NotTaylorSwift as the government agent, well-done!
10) Never let children play with guns. This is the most important item on the list. Children should be taught to shoot, but until they are old enough they should be taught that they are never, ever to touch a gun. They are to find mom or dad immediately. Guns belong in the same category as kitchen knives, chainsaws, and Amy Schumer Barbie dolls. If your children are playing with these, you’ve done something wrong as a parent.

Quizzer is a Christian, Cartoonist, and Humorist. Follow him on Gab.ai/Quizzer and check out his web site tempestinateardrop.com. Cartoons in this post are copyright Codex & Q and used with permission.

Musings on the Size of Congress