You may have been following the rise of Alt-Hero, the creation of Vox Day as a response to the SJW takeover of Marvel Comics.  Over the past couple of weeks, there has been an ongoing dialog between Ethan Van Sciver and Vox regarding the politicization of comic books.  Van Sciver raised the concern that Alt-Hero would invoke politics, just from the other side, and that it would alienate comic book fans.  Vox’s answer, that it may very well alienate existing comics fans but he’s counting on expanding the market.  But if you want to get into that, I suggest you listen to the conversation.  What I want to talk about is less Vox’s answer than this idea that politics has no place in comics.  Because to a certain extent, comics have always been a political medium.  Superman in the ’30’s and ’40’s was very political.  And in fact, the current fight can be brought into focus by looking at one simple act the SJW’s did to Superman, and that is to make him less American.  Everybody knows that Superman stands for Truth, Justice, and The American Way.  But they’ve moved away from the whole American Way thing.  And in fact, they had Superman ready to renounce his American citizenship.  The problem with comics isn’t that there are politics in them.  It’s that comics are an American medium and Americans don’t want to buy comics filled with Anti-American world views.
And to that end, I expect that Vox will find quite a bit of success with his different groups of heroes (The story in Alt-Hero is, as we understand it, is going to center around 3 groups of heroes.  The European Hero Team, The American Military Hero Team, and The American Vigilante Hero Team).  Vox and Chuck Dixon are going to have a lot of room to express the different viewpoints of the 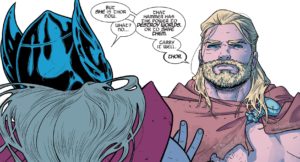 different heroes in these comics.  And rather than detract from the story, I think that if it’s handled well, it will make the story more compelling.  Protagonists and antagonists always have motivations.  Traditionally, a character like Superman stood for Truth, Justice, and the American Way.  Batman wanted to bring justice to the death of his parents.  Captain America was for America.  The Hulk was angry.  But you can’t really get away with telling a story and having a hero be a hero just for the sake of heroism.  A Superman who isn’t raised in Kansas and filled with small town American values isn’t the same hero.  Just like Captain America can’t become an agent of Hydra and still be the same character.  Just like you can’t just swap out Thor with Jane Foster as She-Thor – it’s not the same thing.
So, no, the problem isn’t that there are politics in comic books.  The problem is that SJW’s cannot tolerate dissent from their narrative.  In the SJW mind, America is a capitalist country, an evil empire, so heroes like Superman and Captain America that are practically synonymous with everything good about America have to either be destroyed or broken away from their roots.  And now that the SJW’s are firmly in the driver’s seat of Marvel and DC comics, any Christian serious about their faith is going on a blacklist.  Anybody who believes in limited government is going on a blacklist.  And the heroes and stories that we have grown up with, are going to be uprooted and replaced by zombies who look like them, and occasionally sound like them, but most certainly ARE NOT them.  SJW’s are parasites who cannot create their own art, their own stories, so like the parasites that they are, they try to take over an existing franchise as a host and replace the beliefs of the existing characters, their souls, with the unholy SJW narrative.
So, here’s to hoping that Alt-Hero gives us some good heroes.  Heroes who actually believe in Western Values and aren’t ashamed of the good things that come from Christendom.  And here’s to the success of Arkhaven Comics, because in a world where the SJW’s can oust Orson Scott Card from writing a Superman story, we need somewhere that talented people can work for a living, where we don’t have to fear losing our livelihood because of a refusal to accept something that the Bible describes as an abomination, like has happened to Will Caligan.

Hymn: God Will Take Care Of You