Editor’s Note: We are sharing an article, written by our friend The Angry Patriot. Even if you are not a sports fan, you can recognize the ongoing convergence of SJW ideas into popular culture. This is something that we at MOTW want to stop and roll back. This is a good start.

As a longtime fan of the NFL, and in particular, the New England Patriots, I have a full on vested hatred of the current NFL commish, Roger Goodell.  Before I get started, a little tangent.  You heard me right.  I am a fan of the Patriots.  As a child, my father taught me the ways of Boston sports.  Growing up in the repressive regime of the New England states, we had only one thing going for us.  Boston sports.  And to be honest, apart from the great years of Larry “Legend” Bird, most of my childhood was spent watching team after team fall and fail.  I’m not a bandwagon Boston sports fan.  I remember the dark years of the New England Patriots when the best they had was Scott Zolak.
Now that we’ve got that settled, let’s go back to the subject at hand.  Roger Goodell.  He is the very definition of what a bed-wetting social justice warrior is.  Sure, he started out as your regular All-American high school athlete, lettering in 3 sports.  Those were his glory days.  A washed-up athlete who couldn’t move beyond his high school days.
He rose from an intern to the COO of the NFL, and was selected as the NFL commissioner in 2006.  It would be interesting to figure out how went from alpha athlete to Chief SJW.
Here are just a few of his highlights.

He’s also pushed for more women in NFL executive positions, using something called the Rooney Rule, to ensure that a diverse slate of candidates are interviewed for a position.
Soon after Super Bowl 51, the NFL decided to that they haven’t done enough to disenfranchise their primary audience of red blooded American males.  Texas is currently in the process of passing their own version of the NC bathroom bill, which has the wimps over at the NCAA up in arms.
In a statement made by the NFL spokesman, Brian McCarthy, “We want all fans to feel welcomed at our events and NFL policies prohibit discrimination based on age, gender, race, religion, sexual orientation, or any other improper standard,” and “If a proposal that is discriminatory or inconsistent with our values were to become law there, that would certainly be a factor considered when thinking about awarding future events.” 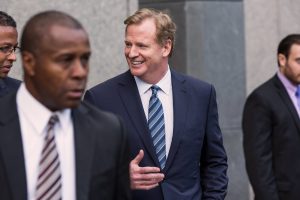 “Future events,” such as the Super Bowl.  The NFL’s reaction to the Texas bathroom bill causes someone like me to want to go and support the state of Texas with my hard-earned money and my vacation time.
I can’t tell you if RG believes that grown men should have the right to invade your daughter’s privacy, or if this is just another attempt to save face, to say the right things that the bloodsucking media wants to hear.  Either way, the NFL’s statement is evidence of a man and organization that has been completely converged by progressive liberals who lack the masculinity of an average redneck.
After a decade of the Goodell experience, nothing surprises me.  I’m not sure that even soccer is this gay.  No, wait, who am I kidding? Soccer is still gayest.

The Inchoate Stance on Terrorism

Beast Life: Man Up and Get a Grip