This is doublethink in full, putrid bloom. Fruits of a twisted and poisoned tree.
If the first holds true, the second is impossible. If the second happens, the first is a lie.
Every terrorist attack done by Muslims is done in the name of Islam. To separate the two as being distinct goes well beyond errant nonsense and makes a serious entry into the nefarious realm. 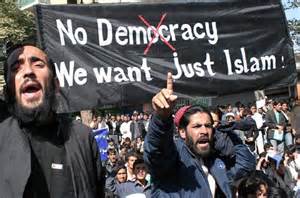 Islam knows only one law: submission. Not theirs, of course, but yours. Dar al-Islam, the house of Islam, spreads by subjugating and conquering Dar al-Harb, the house of war, also known as Dar al-Kufr, the house of heathens.
There are no rules to how that is to be accomplished. Mohammed, the bloodthirsty pedophile, wielded sword and subterfuge to gain power. He used terror and brutality when it helped him achieve his goals, whether that was to conquer or control.
The surest thing to create more Islamic terrorists is to let Islam spread. The surest thing to increase Islamic attacks is let them into Western, Dar al-Kufr, countries.
And yet the Progressives demand we not only let them in but we also lay down our arms in order to present our throats more easily to the invader. And the first arm they demand we abandon is logic and the ability to reason.
They have invested so much into believing nonsense that flies in the face of cold reality that this is simply one more impossible thing to accept in yet another vain attempt to assuage their voracious egos. So they will present this as if it was the most natural thing in the world and be shocked when you don’t buy it hook, line, and sinker.
Don’t give in. Attack them with dialectic to explode pseudo-dialect. Use rhetoric to burn down their carefully crafted insanities and salt the earth where it once stood.

A Man of the West can do nothing less.

Death to the NCAA, Part I

Roger Goodell, the SJW Queen of the NFL