Before being morphed into a kindly old fat man that delivers presents down chimneys, for centuries Saint Nicholas had been a saint of great renown in Christendom.
Nicholas was born March 10th, 270 A.D. to Greek parents in the city of Patara, a Mediterranean port in Asian Minor.
His family’s wealth didn’t prevent his parents from dying when he was young. He was taken in and raised by the bishop of Patara, his uncle Nicholas. 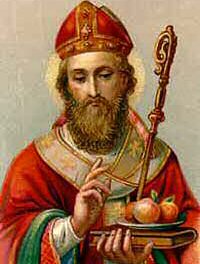 Tradition holds that Saint Nicholas was religious as a young child, even fasting on Wednesdays and Fridays. His guardian Nicholas had tonsured the youngster as a reader. In those days, that meant Nicholas had been educated to read Greek out loud during the liturgy, somewhat a rarity.
During the years between 312 and 315 AD, Saint Nicholas traveled to the Holy Land as a pilgrim to visit many of the sites there where Christ lived and taught. While there, he lived in a cave with other monks at Beit Jala, overlooking Bethlehem.
Soon after he returned to his homelands in 317 AD, Nicholas was anointed bishop of Myra.
Nicholas was one of many bishops that attended the First Council of Nicaea, answering Emperor Constantine’s request. Saint Nicholas supported the Greek Orthodox position and firmly opposed what is now called the Arian hearsy. Nicholas punched the heretic Arius in the face over the dispute.
While in Myra, Saint Nicholas showed his mettle. The land was in turmoil at the time, the Emperor’s troops were sent out to quell a rebellion in Phrygia. After restoring order, the main army sailed to Andriaki and waited for favorable winds. Three soldiers went into town to buy some goods. A gang took advantage of the chaos in the land and impersonated the soldiers. The fake soldiers went on a crime spree, looting and pillaging. Out of concern for public safety and seeking justice, the three real soldiers were seized by a mob of townsmen who. Saint Nicholas, then Bishop, went to the port of Andriaki to meet with the generals and ensure civic peace. The generals asked him for his blessing. They then gave orders to their men to make sure order was maintained and to avoid arrest by obeying the laws. 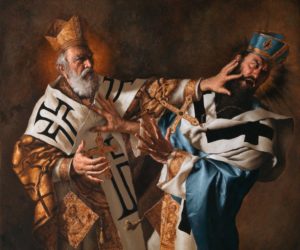 Bishop Nicholas invited the generals back to Myra as his guests. As they neared the city, several men approached the group and cried out to the Bishop, explaining three men were to be put to death.
Nicholas ran to the town square where the three bound soldiers were about to be executed. He wrested the raised sword from the executioner, freed the men, and took them to the governor’s residence, the Pretorium. There, he accused Prefect Eustathios, one of the city’s leaders, of taking bribes and being the driving force that almost claimed the lives of three innocent men.
Startled and afraid, Eustathios admitted to his crimes.
After the charges against the three soldiers had been dropped, Bishop Nicholas forgave Eustathios.
Because of his good deeds and miracles, Saint Nicholas gained quite a number of groups claiming him as their patron saint: “Children, coopers, sailors, fishermen, merchants, broadcasters, the falsely accused, repentant thieves, brewers, pharmacists, archers, pawnbrokers, Aberdeen, Galway, Russia, Greece, Hellenic Navy, Liverpool, Bari, Moscow, Amsterdam, Lorraine and Duchy of Lorraine.” [https://infogalactic.com/info/Saint_Nicholas]