Editor’s Note: We offer another article by our Gentleman Adventurer friend, Adam Piggott. He contacted us after reading Donner’s latest Beast Life article on squats, and suggested that we also provide you his perspective. We also want to point out that Adam lives in Australia, so uses the commie metric system. Here is a handy conversion tool for changing them to freedom units.
I love squatting. I love how it works every facet of my body; my core, my legs, my back and shoulders, everything. I hate squatting. I hate how much it hurts; the grit-your-teeth moment when you begin lowering that bar to the floor while knowing that you mustn’t skimp out and cheat by not getting low enough. I grimace at my own weakness when I do skimp out.
The squat is the most fundamental lifting exercise at the gym. It is that important. Not performing a squat at some point in your routine is like riding a 250cc bike; you’re wasting your time, and everyone else knows it even if you don’t.
For 30 years I was that guy riding the imaginary 250cc bike.
I was 14 when I first stepped into a gym. It was my first job, cleaning a gym on the weekend when it was closed. Back in 1985 in Perth, Western Australia, nothing much was open on the weekends. You couldn’t get go-go juice for your car, you couldn’t buy alcohol or groceries, and you certainly couldn’t go to the gym. Almost nobody was supposed to work on Sunday. That is except for 14 year old teenagers who were cleaning the gyms.
The worst part of the job was cleaning the sauna. It smelt bad. As I scrubbed the wood with a hard brush I tried not to think about the unattractive people who had spent the week opening their sweaty pores on the stained and tired slats. The sauna was turned off but it was still hot enough to be uncomfortable. I always did the sauna first so I could get it out of the way. 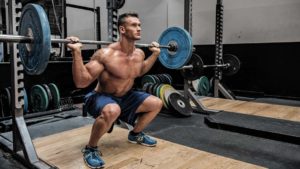 The best part of the job was cleaning all of the weights. It was an old fashioned gym with a main room that was long and cavernous. Both of the long walls were covered in mirrors and the space was taken up with weights and machines whose use was entirely unfamiliar to me. Sometimes I would sit on a machine and try to work out what to do. There were small diagrams besides each individual apparatus but if anything they made it even more confusing. All I could glean was which part of the body the contraption would administer, not how the administering would occur.
I never joined the gym and I quit the job after a few months of sauna scrubbing but it had made an impression on me. A couple of years later I purchased my first lifting bench. I could do bench presses on it and there was a section on the end for hamstring curls and other leg exercises. I didn’t have a fixed routine, nor was I following a specific program, and my results were accordingly tepid.
I wasn’t doing any squats either. A squat rack would have helped but I didn’t know what they were.
A couple of years after that I joined my first gym, a trendy two level building in South Perth that was packed with the young and the beautiful. I had received a flyer in the mail which offered a month free trail. I decided to take them up on their offer but when I walked in I was a sitting duck. The manager took me into his office and sat me down, and before I knew what was happening I had signed up for a year long membership.
I hit the weights hard but I still didn’t know what I was doing. My form was probably terrible, and my results were marginal, but the gym was full of hot chicks and I even managed to pull a few of them. Pretty soon my attendance fell and soon I stopped going all together. The fees kept disappearing from my bank account for some time after.
Many years later when I was rafting in the Italian Alps, a rafting buddy convinced me to join the local gym with him. It was a tiny space in a converted loft, but it was close to the rafting base and the owner was a good guy. We would hit the gym after finishing rafting for the day in the late afternoon. Pumping iron helped to clear my head after a frustrating day on the river with mongoloid clients. I had found a lifting program online and the two of us followed it religiously. Except for one little part.
We didn’t squat.
It was too hard, too tiring, too painful. We convinced ourselves that we didn’t need it. I achieved great results, the best that I’d ever seen in my life, but if I hadn’t been so pig-headed about the squats then my results would have been that much better. I know that now.
I returned to Australia when I was 40 after 15 years of continuous rafting. I entered a period of not doing any exercise at all. After doing it as a job for so long I just couldn’t be bothered with it anymore. I still looked like I was in shape but I wasn’t anywhere near where I used to be. This period of inactivity lasted for 5 years.
And then one day I went back to the gym.
The closest gym to my house is a poxy affair whose clientele consists primarily of middle aged trophy wives and old men attempting to stave off the inevitable decline and lifetime of little to no exercise. Which means that I have the majority of the free weights to myself. After all the years of trying and mostly failing I have learned a few lessons that I stick to.

There is no squat free day at the gym. Every session begins with the squat. I do the squat first because I know that if it’s a bad day my mental toughness might not last to the end of the session. And you need mental toughness for the squat. 5 sets of 5 reps. Enough weight on the bar that you can’t physically close out the last set of 5.
The squat rack is my piece of equipment. Everyone in the gyms knows this. If the trainers are next to the rack with a client and they see me walk in then they move just slightly out of the way. They know which piece of equipment I’m going to be using. I have only ever had to wait for the rack the one time. I did my other exercises first. I was happy to wait for it because I was happy to see someone else using it. Luckily it wasn’t a bad day.
Every time I approach the rack it’s the same. I remove the bar holders on the outside of the rack and reposition them on the inside. That way if I fail a set the lower rungs will catch the bar as it falls. I have never found the rack with the bar holders ready for me on the inside. I put the bar on the rack and then I do a few warm up sets just with the 20kg bar. I get it as deep as I can, warming up the whole body.
Then I load the weight. As I do this I contemplate if I’m going to go heavier this time. You always have to push yourself and keep increasing the weight week to week. The 1.25kg weights belong to me; I’ve never seen anyone else use them. I had to ask the gym to specifically order them in. They are invaluable for the standing military press but I use them for the squat as well. Even a small increase is still an increase. Eventually all of those 1.25kg weights add up to a 20kg smackeroo.
After it’s all loaded then I approach the bar. I duck my head under and nestle the bar across my shoulders, giving it a little wiggle to get it in there nice and good. No towel for me. You have to feel the weight in order to control the weight. The bar padding with the Velcro wrap lies discarded on the floor where it belongs. Then I steady and lift the weight off the rack. I love the feeling of fully supporting the weight. It’s the best part of the exercise. Everything that follows is the crappy part.
I raise my chin and look directly forward and then I push out my knees and down I go. Lower, lower, go lower, you can go lower than that. I talk to myself in my head. Then comes the really hard bit. Push out the air and get it back to the top. Up you come, like a deep sea diver straining to get it back to the surface before the air runs out. My knees are jelly, my legs are shaking. The tendons on my biceps are standing out. I get it successfully back to the top.
That’s one.
Four more to go. Remember to breathe.
Why do we do this again? Because life is not about arriving. It is about doing. You won’t have to squat when you’re dead, but until then …
Squat.

Video: How Should We Then Live – Part 6