Note: I am not a professional. If you follow my advice and still get your dumbass killed, don’t blame me.
What to do in an active shooter scenario when you can’t pull out your CC weapon and solve the problem with some vitamin Pb.
Pre-emergency: know your surroundings. Take note of exits. You should always have some level of situational awareness going on at all times. 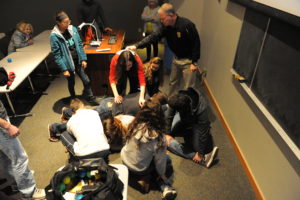 Most active shooter events last roughly 15 minutes, until the shooter is stopped or takes his own life. As soon as things go south, there is a time limit to how much damage the shooter can do. Your job is to keep from becoming a victim and to help those around you.
You might be caught up in the madness alone, or with friends, or worse, with family. Taking some time before something happens and just working though some mental scenarios always pays off. You’ll be more confident in you decisions, if you’ve at least imagined the possibilities. The latest phrases I’ve heard as a game plan are similar in nature: “Run/Hide/Fight” and “Avoid/Deny/Defend”. “Run” and “Avoid” are obvious. “Deny” is more active than just hiding: you are looking for ways to turn where you are a harder target. The hope is the attacker won’t try to get at you, but instead, he will seek softer targets. For example, if you are in a room, barricade the door, turn off the lights, stay way from the windows, and keep everyone silent. “Defend” and “Fight” are situational.
These aren’t in any particular order, so adapt to the situation. Also, they are not mutually exclusive. Your goal, really, is to make you and those around you into the smallest targets you can, while hardening your position if you have to dig in.
Ok, great, that worked. You have people in a safe zone. You can hear shooting, and some person staggers into your view, shot, and collapses to the ground.
First, make sure any rescue attempt doesn’t put you in danger. First, keep yourself safe. You can’t help anyone if you’re injured.
Second, if the person’s position might land you both back into danger, get him out of there. That goes for any accident or terrorist event. It used to be people were told not to move the injured in case of neck injury. According to the military, and what has been found by the police and paramedics, this is very low risk. What’s worse is the victim bleeding out.
Which leads me to the third point: stop the bleeding. If it’s just an ugly superficial injury, steady applied pressure with the cleanest materials you have on hand will be enough. (MAKE SURE YOU HAVE SOMETHING BETWEEN THE VICTIM’S BLOOD AND YOUR SKIN! CLEANER THE BETTER.) Once the bleeding is stopped and you have it covered, the best you can do, then check breathing, for broken bones, shock, etc. Stopping the bleeding is the first thing to do before the other steps.
If the bleeding isn’t stopping from just pressure alone, you can either stuff the wound and wrap it tight, or if you have one or can make one, apply a tourniquet. The stance on tourniquets has also changed. I remember learning that that was the last resort, but now, if you need to, apply one as close to the torso as you can and ratchet it down really, really tight. If you are doing it right, it will be painful. Just keep assuring the victim that things will be okay and this is necessary to keep them alive until the paramedics can arrive.
Every minute of uncontrolled bleeding decreases the chance of survival. After two liters of blood are lost, the victim can enter irreversible 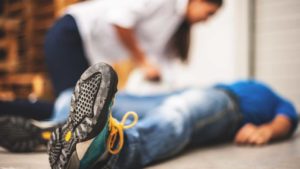 shock, which we don’t have a way to treat. So far, the best way to treat irreversible shock is to prevent it from happening.
EMS response time averages around six to nine minutes in most cases. A shooting or terrorist event will complicate things, so plan on the earliest time of nine minutes. But if you do anything at all, you give that person better odds of survival and will make the paramedics’ job easier in saving that person’s life.
Any action is better than doing nothing. Someone has to act first and that someone will be you. You can paralyze yourself with over-analysis. That’s why knowing this stuff before, training even somewhat, and going over scenarios in your head, will all be of great benefit. You will have something in mind that will need to be done and you will start doing that. Because you are a Man of the West, that’s why.
Active shooting scenarios and other terrorist events are frightening and will get your heart pumping. Keeping a level head and acting will reduce the odds of you being a victim and can possibly save lives.