The Battle of Brunanburh in 937 A.D. was a decisive battle in England that set the course of history.
Since the collapse of the Roman Empire, England had been an island beset by clans and groups fighting each other and invaders from the Norway and Sweden. Smaller kingdoms had arisen, dominated, and fallen, until finally, King Æthelstan had forged a unified Britton under his crown. It was a shaky union, but it held.
Until the Scottish King Constantine II decided to violate the treaty. 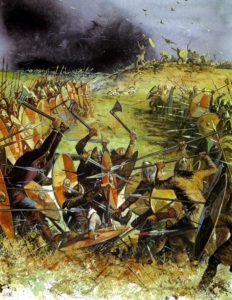 Æthelstan was furious. Marching toward Scotland, he promised to rain down destruction on the king and his people. His army rolled into Scotland without a hitch.
Fearing for his life, King Constantine allied with the king of Dublin, Olaf Guthfrithson, and the king of Strathclyde, Owen. (Strathclyde was a piece of Scotland that considered itself to be a kingdom. I told you there were small kingdoms.)
Against the alliance of the three kings, Æthelstan and his brother Edmund gathered up their forces from Wessex and Mercia (Southernish England) and marched to battle.
The Saxons fell like a hammer on the alliance, smashing through the mighty shield wall, shattering spears and sundering any before them.
In one battle, Æthelstan put down any contenders to his rule and pulled England into a unified kingdom, at least, for the time being.
It forged a national identity that hadn’t really existed. The news of the battle spread throughout the land and gave a reference point the common man could point to and say, “My King did that!”
(More here: https://infogalactic.com/info/Battle_of_Brunanburh)
The Anglo-Saxon Chronicle has a record of the battle in poem form. Just listen to the way Old English sounds:

Video: The Evidence Against Materialism

The Story of the Lusiad