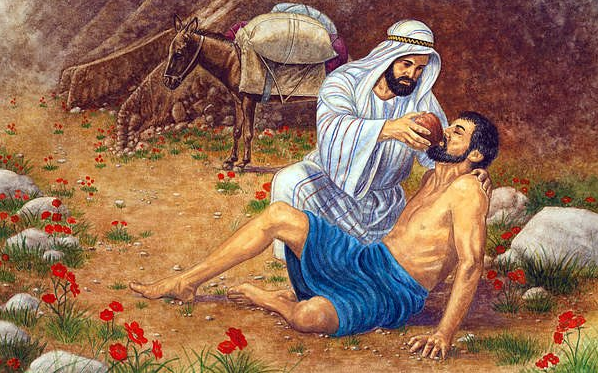 Editor’s note:  The following comprises the fifth chapter, first part (A4), of The Gospel of Luke: An Exposition, by Charles R. Erdman (published 1936).  All spelling in the original.

4. The Good Samaritan (10:25-37)
___________________________________________________
25 And behold, a certain lawyer stood up and made trial of Him, saying, Teacher, what shall I do to inherit eternal life? 26 And He said unto him, What is written in the law? how readest thou? 27 And he answering said, Thou shalt love the Lord thy God with all thy heart, and with all thy soul, and with all thy strength, and with all thy mind; and thy neighbor as thyself. 28 And He said unto him, Thou hast answered right: this do, and thou shalt live. 29 But he, desiring to justify himself, said unto Jesus, And who is my neighbor? 30 Jesus made answer and said, A certain man was going down from Jerusalem to Jericho; and he fell among robbers, who both stripped him and beat him, and departed, leaving him half dead. 31 And by chance a certain priest was going down that way: and when he saw him, he passed by on the other side. 32 And in like manner a Levite also, when he came to the place, and saw him, passed by on other side. 33 But a certain Samaritan, as he journeyed, came where he was: and when he saw him, he was moved with compassion, 34 and came to him, and bound up his wounds, pouring on them oil and wine; and he set him on his own beast, and brought him to an inn, and took care of him. 35 And on the morrow he took out two shillings, and gave them to the host, and said, Take care of him; and whatsoever thou spendest more, I, when I come back again, will repay thee. 36 Which of these three, thinkest thou, proved neighbor unto him that fell among the robbers? 37 And he said, He that showed mercy on him. And Jesus said unto him, Go, and do thou likewise.
___________________________________________________
The parable of the Good Samaritan was spoken to a certain lawyer who, trusting to his knowledge of the Old Testament, and of its subtle interpretations by the rabbis, came to Jesus hoping to dispute with Him and to defeat Him in debate. He asked Jesus this question, “Teacher, what shall I do to inherit eternal life?” He evidently thought that Jesus would prescribe some new rites or ceremonies or would in some other way disparage the Law. He was startled, then, to have Jesus reply, “What is written in the law?” This answer robbed the enemy of his own weapon. He, however, made a skillful reply, and declared that the Law is summarized in the requirement to love God and man. Jesus again replied, “Thou hast answered right: this do, and thou shalt live.” There was no shadow of evasion or deception in the statement of Jesus. Perfect love to God and to man is surely the way of life; but who can show such perfect love? Jesus came not to destroy this requirement of the Law but to reveal its complete fulfillment, to secure pardon for those who were guilty of its infraction, and to give power to those who felt their need.
The reply of Jesus not only defeated the lawyer; it smote his conscience. He realized that he himself had never fulfilled the requirement of the Law he knew so well. He therefore attempted to justify himself by limiting the sphere to which the law of love applies. This is always the experience of those who seek to save themselves while rejecting the salvation of Christ. No one in his own power can fulfill the demands of this perfect law; either we must secure aid outside ourselves and trust in a loving Saviour, or else we must in some way lessen the demands which the law makes. The lawyer suggested that it is impossible to love everyone, even though it be required to love our neighbors, and to justify himself he asked the question, “And who is my neighbor?” Jesus replied by the story of the man, evidently a Jew, who went down the steep road from Jerusalem to Jericho and, as he passed through the narrow gorge, was beset by robbers who stripped him of his garments and his possessions and left him half dead. The first to approach this pitiful sufferer was a priest, a man whose profession and task in life would induce him to perform a deed of mercy, but in fear of thieves or in blind oblivion to the need of the wounded man, he passed by on the other side. Next came a Levite, one whose office was that of a helper to the priests, a man who supposedly would be less burdened by official duties and would have more time to extend relief; but he likewise passed by. At last came a Samaritan, a man of an alien race and of a despised religion, but he showed compassion; he bound up the wounds of the sufferer and placed him on his beast and brought him to an inn and paid for his entertainment. He showed the spirit of love. Thus Jesus indicated that our neighbor is not only one who “lives near” but one who needs our help, as well as one who helps our need. He demonstrated the truth that the law of love is not limited by rank or station or race or creed. Nor is it limited to man. One must likewise love God with all the heart, and thus he will surely love and serve the Son in whom the love of God is made perfect.
(Go back to previous chapter)
(Continue to next chapter)

Sermon: Men Made Rich By the Poverty of Christ