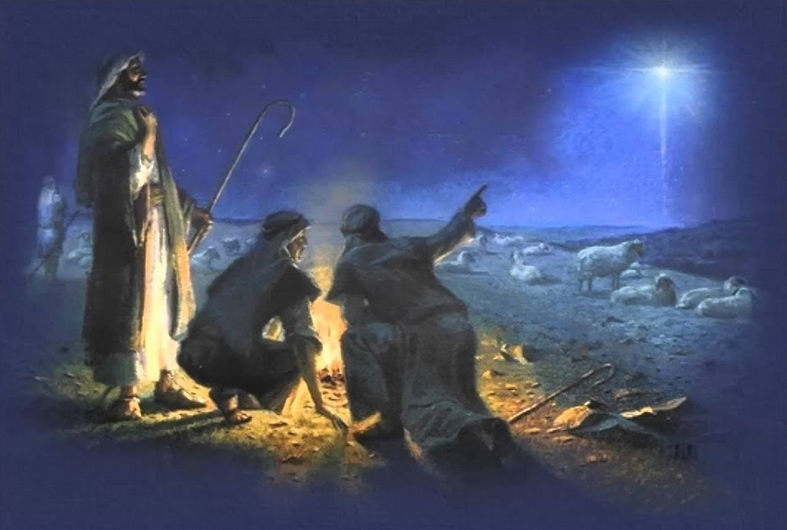 Editor’s note:  The following comprises the second chapter, fifth part, of The Gospel of Luke: An Exposition, by Charles R. Erdman (published 1936).  All spelling in the original.

E. The Birth of Jesus (Luke 2:1-20)
________________________________________________________________
1 Now it came to pass in those days, there went out a decree from Cæsar Augustus, that all the world should be enrolled. 2 This was the first enrolment made when Quirinius was governor of Syria. 3 And all went to enrol themselves, every one to his own city. 4 And Joseph also went up from Galilee, out of the city of Nazareth, into Judæa, to the city of David, which is called Bethlehem, because he was of the house and family of David; 5 to enrol himself with Mary, who was betrothed to him, being great with child. 6 And it came to pass, while they were there, the days were fulfilled that she should be delivered. 7 And she brought forth her firstborn son; and she wrapped him in swaddling clothes, and laid him in a manger, because there was no room for them in the inn.
8 And there were shepherds in the same country abiding in the field, and keeping watch by night over their flock. 9 And an angel of the Lord stood by them, and the glory of the Lord shone round about them: and they were sore afraid. 10 And the angel said unto them, Be not afraid; for behold, I bring you good tidings of great joy which shall be to all the people: 11 for there is born to you this day in the city of David a Saviour, who is Christ the Lord. 12 And this is the sign unto you: Ye shall find a babe wrapped in swaddling clothes, and lying in a manger. 13 And suddenly there was with the angel a multitude of the heavenly host praising God, and saying,

14 Glory to God in the highest,

And on earth peace among men in whom he is well pleased.

The story of the birth of Jesus as related by Matthew is in striking contrast with that of Luke. Matthew depicts Jesus as a King and at his birth the reigning Herod trembles on his throne and the Magi adore him, offering regal gifts. Luke represents Jesus as the ideal Man, and the story is full of human interest. It describes two obscure peasants journeying from their northern home in Nazareth to Bethlehem and there, excluded from the inn, placing in a manger their newborn babe, while the first to visit them are humble shepherds from the neighboring plain. Human interests, however, are not merely earthly interests; the story is vocal with heavenly melodies and inwoven with messages of divine meaning and grace.
Only the most recent scholarship has vindicated the historic accuracy of Luke in connecting the event with the decree of Augustus and with the enrollment under Quirinius. However, these facts are mentioned by Luke not so much to fix the date of the birth of Christ as to explain how this occurred in Bethlehem when the home of his parents was in Nazareth. Only a legal necessity would have made them willing to take such a journey at such a time, but thus it appears that the emperor of the world was concerned unconsciously in the fulfillment of divine prophecy concerning the Saviour of the world. According to the imperial decree, Joseph left Nazareth and with Mary, to whom according to Matthew he was not only “betrothed” but married, journeyed to Bethlehem, five miles south of Jerusalem, to be enrolled in his ancestral city. There is born their promised Son. Their exclusion from the inn was not due to any lack of hospitality; much less did it express hostility to Jesus; it was due simply to the crowded condition of the town. However, it is suggestive of the obscurity and discomfort and poverty of Joseph and Mary.
In view of his evident appreciation of the supreme importance of the birth of Jesus, the account of Luke is almost startling in its brevity and simplicity. However, with consummate art, after his own short statement of fact, he allows divine messengers to give the interpretation and to express the significance of the event. These messengers were angels. They appeared to a group of shepherds who were “abiding in the field, and keeping watch by night over their flock.” Out of a blaze of heavenly glory came the tidings of great joy to Israel, “There is born to you this day in the city of David a Saviour, who is Christ the Lord.” The angel did not then disclose the larger truth, that this Christ was to be the redeemer of all men or that he was a divine Lord. However, a sign was given whereby the shepherds might be able to distinguish the child and to be assured that he was the Christ: “Ye shall find a babe wrapped in swaddling clothes, and lying in a manger.” A strange sign it was; yet for us it has become a symbol full of meaning; a Redeemer who was cradled in a manger has known what it is to endure poverty and suffering and neglect, and now he can sympathize with the lowly and distressed even as he is abundantly able to save.
When the good news had been given, there suddenly swelled forth an angel chorus, singing that great hymn of the nativity which, as subsequently expanded by Christian worshipers, is named from its Latin version, the Gloria in Excelsis. As sung by the angels it is composed of two verses, each containing three corresponding notes, “glory” and “peace,” “in the highest” (heaven) and “on earth,” “God,” and “men.” This is a hymn of praise to God who in the gift of a Saviour manifests in heaven his excellence and on earth reveals his grace to men, the recipients of his favor. The result of this, however, is declared to be “peace;” in Christ alone can peace be secured—peace with God, peace for the human heart, peace between men, peace for the world.
The astonished shepherds hastened to verify the good news and they became in a real sense the first witnesses for Christ as “they made known concerning the saying which was spoken to them about this child.” It is not strange that all who heard wondered, or that Mary treasured in her heart the heavenly messages, or that the shepherds returned to their tasks with gratitude and praise, for there lingered in their memories a song which expresses still the hope of all mankind.
(Go back to previous chapter)
(Continue to next chapter)