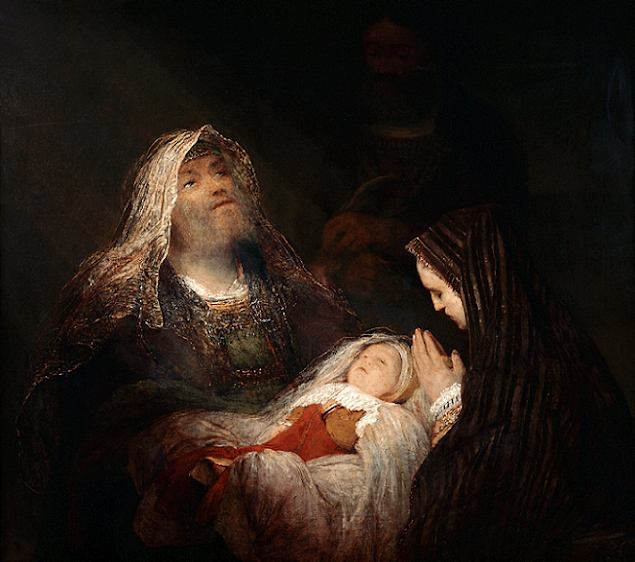 Editor’s note:  The following comprises the second chapter, sixth part, of The Gospel of Luke: An Exposition, by Charles R. Erdman (published 1936).  All spelling in the original.

According to thy word, in peace;

30 For mine eyes have seen thy salvation,

31 Which thou hast prepared before the face of all peoples;

32 A light for revelation to the Gentiles,

And the glory of thy people Israel.

33 And his father and his mother were marvelling at the things which were spoken concerning him; 34 and Simeon blessed them, and said unto Mary his mother, Behold, this child is set for the falling and the rising of many in Israel; and for a sign which is spoken against; 35 yea and a sword shall pierce through thine own soul; that thoughts out of many hearts may be revealed. 36 And there was one Anna, a prophetess, the daughter of Phanuel, of the tribe of Asher (she was of a great age, having lived with a husband seven years from her virginity, 37 and she had been a widow even unto fourscore and four years), who departed not from the temple, worshipping with fastings and supplications night and day. 38 And coming up at that very hour she gave thanks unto God, and spake of him to all them that were looking for the redemption of Jerusalem. 39 And when they had accomplished all things that were according to the law of the Lord, they returned into Galilee, to their own city Nazareth.
40 And the child grew, and waxed strong, filled with wisdom: and the grace of God was upon him.
_____________________________________________________________________________

The incidents of the infancy of Jesus recorded by Luke not only add human interest to the story but they interpret the future career and the saving work of our Lord. Thus when on the eighth day he was named “Jesus,” a name often given to Jewish boys, it was because he was destined to fulfill all that the name implies, for he was to be the “Salvation of the Lord.”
So, too, when five weeks later he was presented in the Temple, when his mother offered for herself a sacrifice which indicated lack of wealth but not abject poverty, the real significance of the scene is set forth in the prophetic utterances of the saintly Simeon and Anna. The first of these utterances was the song of Simeon, called from the Latin form of its opening words the Nunc Dimittis (“Now Lettest Thou Depart”). To this devout soul it had been revealed that he should not die until he had seen the Messiah, “the Lord’s Christ.” Led by the Spirit to the Temple while the parents of Jesus are there presenting their Son before the Lord, he took the little babe in his arms and sang the sweetest and most solemn song of the nativity, which, unlike the Magnificat or the Benedictus, promises redemption not only to Israel but to all the world.
“Now lettest thou thy servant depart … in peace;” the figure of speech is full of beauty; it is the word of a faithful watchman who welcomes with joy the hour of his dismissal, for he has caught the vision of the coming One; now he is about to be sent away in the peace of an accomplished task, in the peace of fulfilled hope; for his eyes have seen the Saviour according to the promise of the Lord. The redemption which the Messiah brings, as the song continues to declare, is for all peoples; it is a light to reveal the way of salvation to the Gentiles; it is to be the true glory of the favored people, Israel.
While this salvation is provided for all, it will not be accepted by all. To the wondering mother, Simeon uttered a dark word of prophecy. The ministry of Jesus will be the occasion for the fall and the rise of many. Their attitude toward him will be a revelation of character; some will reject him and thus condemn themselves; some will speak against him, even though he is the very token and instrument of divine salvation; this opposition will reach its climax at the cross, when bitter anguish like a sword will pierce the soul of Mary. Jesus is to be the touchstone of character; wherever he is known, by accepting or by rejecting him, men will disclose their true nature; “the thoughts out of many hearts” will be “revealed.”
While Mary and Joseph were still wondering at these sublime words there appeared an aged prophetess whose long years of widowhood had been spent in continual worship; she, too, praised God for the salvation to be accomplished by the Child of Mary and she went forth to speak of him to all who like her “were looking for the redemption of Jerusalem.”
Mary and Joseph, however, returned to their home in Nazareth where Jesus was to spend his infancy and early childhood. During those years of obscurity his development was normal, but unique in its symmetry and its perfection; he “grew, and waxed strong” in body, but there was just as true a growth in mind and spirit; he was “filled with wisdom: and the grace of God was upon him.” The Saviour of the world was to be the ideal Man.
(Go back to previous chapter)
(Continue to next chapter)