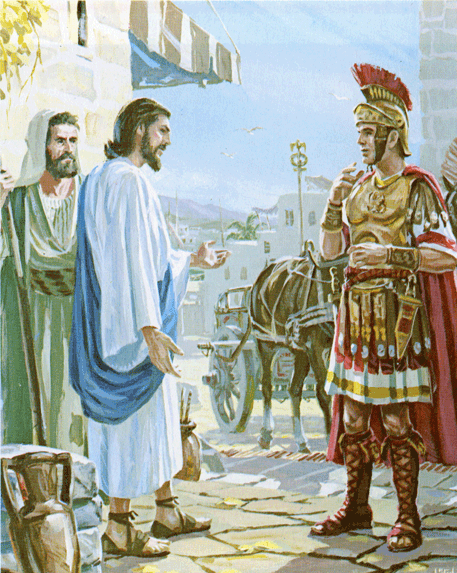 Editor’s note:  The following comprises the fourth chapter, third part (C3), of The Gospel of Luke: An Exposition, by Charles R. Erdman (published 1936).  All spelling in the original.

3. The Centurion of Capernaum (7:1-10)
___________________________________________________
1 After he had ended all his sayings in the ears of the people, he entered into Capernaum.
2 And a certain centurion’s servant, who was dear unto him, was sick and at the point of death. 3 And when he heard concerning Jesus, he sent unto him elders of the Jews, asking him that he would come and save his servant. 4 And they, when they came to Jesus, besought him earnestly, saying, He is worthy that thou shouldest do this for him; 5 for he loveth our nation, and himself built us our synagogue. 6 And Jesus went with them. And when he was now not far from the house, the centurion sent friends to him, saying unto him, Lord, trouble not thyself; for I am not worthy that thou shouldest come under my roof: 7 wherefore neither thought I myself worthy to come unto thee: but say the word, and my servant shall be healed. 8 For I also am a man set under authority, having under myself soldiers: and I say to this one, Go, and he goeth; and to another, Come, and he cometh; and to my servant, Do this, and he doeth it. 9 And when Jesus heard these things, he marvelled at him, and turned and said unto the multitude that followed him, I say unto you, I have not found so great faith, no, not in Israel. 10 And they that were sent, returning to the house, found the servant whole.
___________________________________________________
No more perfect picture of faith has been recorded than that in which Luke sketches the centurion of Capernaum who sent to Jesus the request to heal a favorite servant then lying at the door of death. This military commander, a heathen by birth, was evidently a man of the same high character as is attributed in the New Testament to all soldiers of a similar rank. It may be helpful to notice some features of his faith which was so great that our Lord “marvelled at him.” First of all, the centurion was confident that Jesus could cure, because of what he had heard concerning our Lord. This is the very essence of faith, namely belief founded upon evidence. Faith is not credulity or fancy or caprice; it is a purely rational exercise of the mind; it is reasoning from the reports of credible witnesses. The centurion had heard enough of the power and goodness of Jesus to convince him of his ability to heal. Unbelief in the face of evidence is stupidity or sin.
Again, the centurion revealed the sincerity of true faith. He had accepted light as far as this had been revealed. He had been attracted by the pure worship of Judaism and had shown his sympathy with its adherents by building for them a synagogue. When one lives in accordance with the light he has, more light is sure to break.
Then again, he revealed the humility of faith. He regarded himself as unworthy to come into the presence of Jesus to present his request; and when Jesus offered to come to his home, he sent word that he was not worthy to have the Master come under his roof.
Most explicitly of all, he expressed the trust in Christ and the dependence upon his power which characterize true faith. He said that it was unnecessary for Jesus to come to his house; as a soldier and an officer he knew what could be accomplished by a word of command; he knew what it was to obey and to be obeyed, and he had accredited to Jesus such control over the unseen powers of disease that he sent his surprising message, “But say the word, and my servant shall be healed.” It was just this aspect of his faith which so impressed our Lord, and it is such humble trust that he still regards with favor and is certain to reward. It is not strange that they “that were sent, returning to the house, found the servant whole,” or that Luke rejoiced to tell this story which reveals belief in Christ on the part of one who was found outside of Israel, a belief which was prophetic of the blessings which faith was to bring to men of all the nations in the world.
(Go back to previous chapter)
(Continue to next chapter)

The Kurgan Honors A Hero

Hymn: All To Jesus, I Surrender