The voice traveled miles through the fogs of sleep, and then, after a long time, I heard it and opened my eyes. Someone had switched on the light. I looked around. Major Henderson was out, and already Rollow, Ward, and Schlendering were dressing.

Rollow, sitting in the bunk near mine, began to bang his shoe on a piece of iron pipe near my pillow. “Get up out of that flea bag!” he shouted above the din. “Get up! Get up! Get up!”

That noise was too much. I climbed out of my bunk and began to dress. Glancing at my watch, I found it to be only a few minutes past three A.M. Well, this must be it; this was not just another alert. The waiting was ended. Looking about the room, I could see that I was not alone in my opinion. Using a Saturday Evening Post across his knees as a desk, one of the boys was writing a letter. No one had written letters at three o’clock in the morning before….

When I had finished dressing, I made my way through pitch-black darkness to the mess hall. There I found the others of the dive-bombing and fighter squadrons already collected. I cannot recall the names or faces; I had seen them too often before to take notice of them now. But it seemed as though everyone had something to say. We were like people who keep talking all through a minor operation in order to keep their minds active on other things than what the doctor is doing. So while we chewed on thick slices of bread with marmalade and drank burning hot swallows of coffee, we talked and talked. Who listened, I’ll never know.

It was still not yet dawn when we made our way in groups of threes and fours to where the planes were waiting in pits. Private Huber, my gunner, was already there checking his guns and ammunition and whatever else he had to do. I didn’t know Huber very well, but in just a few hours I was to find out a great deal about him.

A 500-pound bomb was in place under the fuselage. It looked deadly even there. I climbed into my cockpit and started the engine to warm it up in case a quick take-off was necessary; then I tried the radio and inter com telephones. Everything was in order. Danny Iverson, who was in the pit next to mine, waved, and I waved back. There was nothing to do now but wait.

Perhaps I should write a short note to Janet; it could be written by the light from the instrument panel. No, I decided against it. It was too late for that now. If I was to write I wanted it to be something meaningful and everlasting in case I didn’t come back. I couldn’t think of any such words now. I could think only of her, and of our unborn baby. What would the baby be like? A boy or a girl? A boy, of course, and he would be named after my dad. Thomas F. Moore, III; it sounded almost like a king’s name. What would he look like? Would he cry a lot? Sure! He’d cry just to show his spirit. How big would his fingers be? And his toes? My baby, my son. That was the hardest of all to imagine…. God, let me live long enough to see him!

In the east, the sun was beginning to bayonet away the night. Morning was coming…. An hour later it had arrived.

Major Henderson’s plane started to taxi slowly along the runway that adjoined my position. As he approached, it appeared as though he were getting ready to take off on a routine patrol flight. Captain Zach Tyler ran out toward the moving plane, and when the Major saw him he stopped. Tyler bounced up on the wing and spoke a few words, then I saw Major Henderson’s hand describe a slow, beckoning motion. Tyler ran back to his own plane and started getting ready. Then Danny Iverson began to move out on the runway. That was all I needed. Already the Major’s plane was in the air.

I gunned the engine and we moved out onto the runway. We headed into the wind, and then my hand pushed the throttle forward. We began to move faster and faster. The plane was straining to lift itself into the air when the engine started coughing and spitting. I knew I wasn’t going to make it. I cut the throttle back sharply, intending to taxi the plane to the engineering shack and have the engine checked. Then I saw many more of my squadron mates taking off. I wanted to be with them. I decided to try it again. With some difficulty, we got into the air. 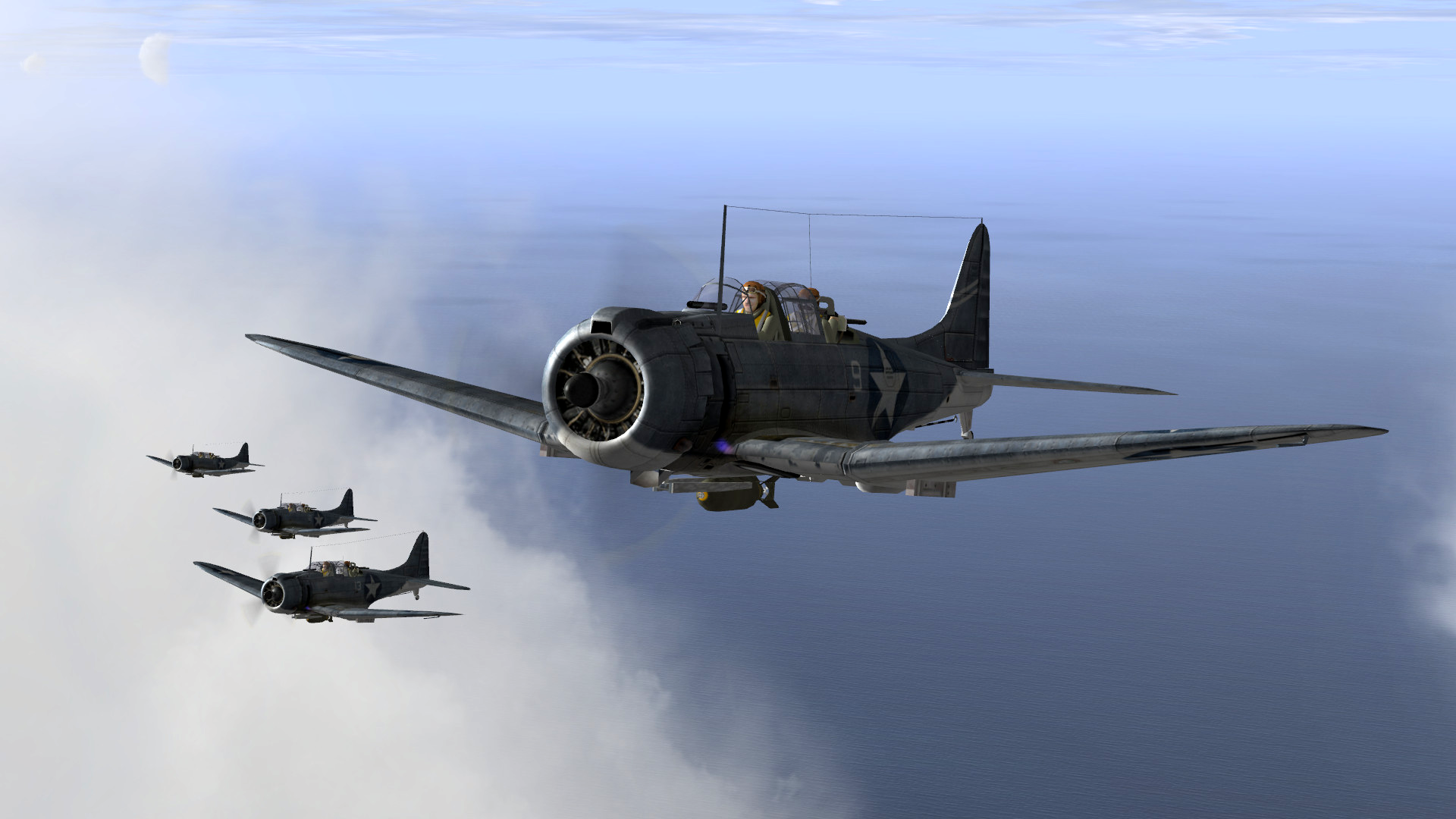 I had heard no formal command given, but our squadron was up. For almost a minute and a half there was nothing but the steady drone of our engine, and a few idle remarks passing over the phones. I was wondering whether we would see any enemy when suddenly over the radio came the unbelievable words: 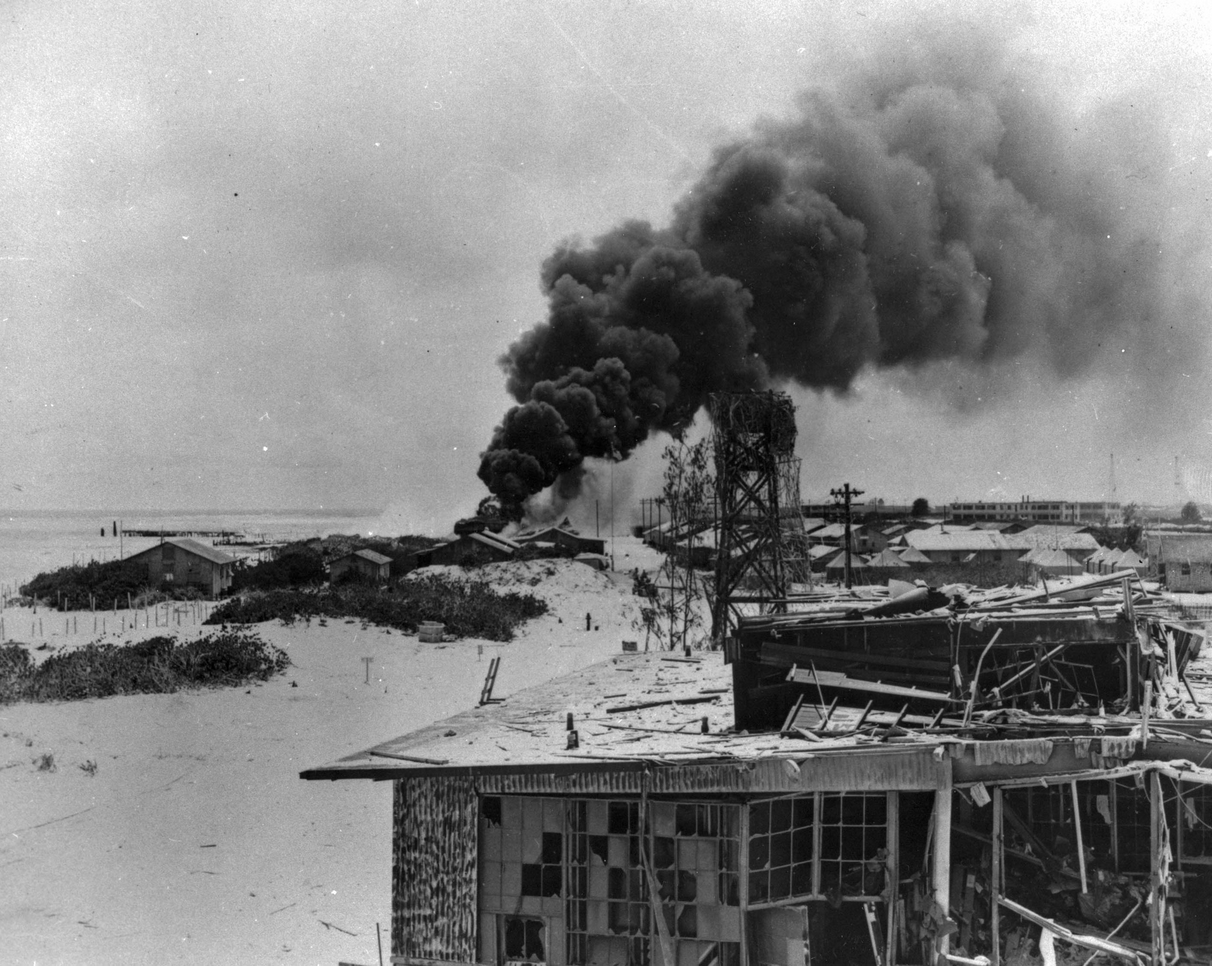 I glanced backward. It was true—bombs were bursting all over the island. All at once a sheet of flame streaked toward heaven and fell back. Thick palls of smoke were climbing upward from three different places. We rendezvoused at a predetermined point. We fell into a box formation as we flew. Above, the sky was very blue and clean of clouds. The wind from the propeller whipped around my goggled eyes and face, but otherwise the weather was mild. Then Dick Fleming’s voice came on directing a change in our course.

Major Henderson was some distance off to our right, flying a roving patrol scouting the enemy. He felt he was more apt to spot them if he didn’t have to concentrate on his place in the formation.

The enemy! What would they be like? How would it be to attack them? To kill them?

My watch—it was a high school graduation gift from Mother and Dad—was marking off minute after minute, sixty of them… sixty-one… sixty-two… still we flew on. 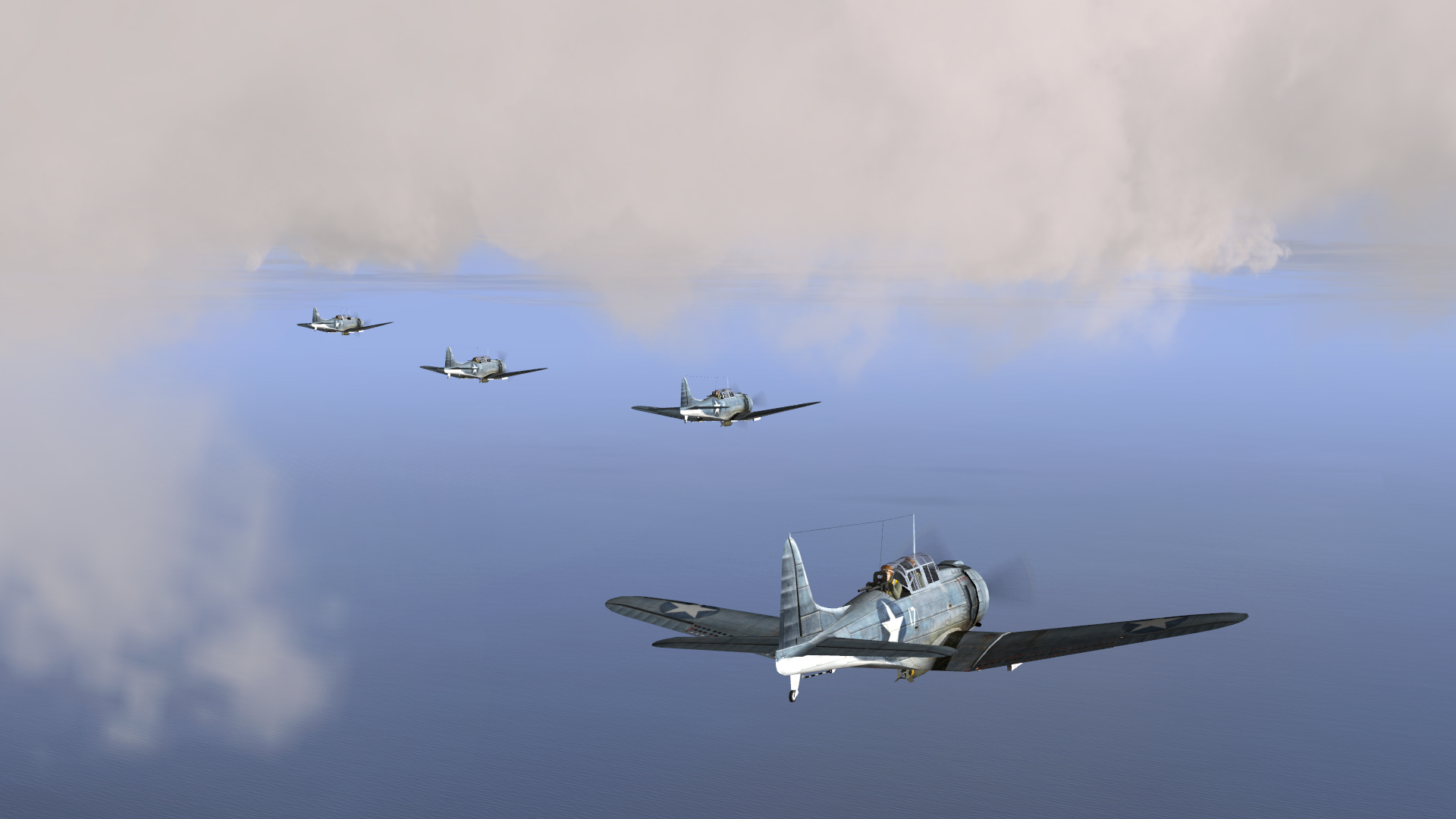 I wished I had written that letter to Janet. She knew I was at Midway. Already the news of the battle’s beginning must be on its way back home…. How would Janet react? How would Mother and Dad react? How would America react? It would depend on the outcome. … I was scared, no doubt about it. … What was Huber thinking?

I ordered him to recheck his guns and make sure they were in good working order. We’d be in this together, he and I. Rank had kept us apart; I hardly knew him.

But if we died today, we’d remain beneath the sea through eternity no more than five feet apart. It was a rub….

Sermon: Zeal in the Cause of Christ

Book Review: The Coming of Christianity to Anglo-Saxon England, Part 1