Author’s Note: This review ended up being fairly long, so I am breaking it up into two parts. I will run them on consecutive days. This refers to Mayr-Harting’s The Coming of Christianity to Anglo-Saxon England.
What Is This Book About?
Mayr-Harting attempts to show the conversion of England from paganism to Christianity by considering the larger historical context. The book is not so much a narrative of the conversion as an effort to see how English society was transformed by the change. Furthermore, the author offers insight into continental connections, both in importing Christianization to England and in the exporting of Christianity that eventually took place as British mission strategy and theology were integrated into Roman Catholicism as a whole.
Due to the international nature of the discussion, Mayr-Harting does not limit his work to England and English writers, but looks at material from the continent and Ireland, as well. At the same time, the focus is upon how Christianity was “fashioned” in England and how it came to be defined there (p. 2). The author recognizes that the majority of extant sources point to “those who spread the Gospel rather than on those to whom it was spread” (p. 3). These sources, along with modern archaeological studies, are used to show how the various traditions of the Anglo-Saxon people (paganism, Irish Christianity, Roman Christianity, etc.) were synthesized into Anglo-Saxon Christianity. 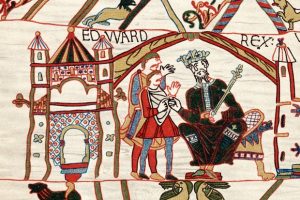 Primarily, the study focuses upon ecclesiastical leaders, bishops and monks, and how they “prepared themselves…to Christianize their world and how they conceived their task” (p. 2-3). Rather than argue that Rome sent missionaries to spread the Gospel, the author posits that localism was active and influential, and that many traditions developed within Anglo-Saxon England were eventually transported to Rome, where they later became standard Roman Catholic practice.


Why Did The Scholar Write The Book?
Mayr-Harting was focused upon showing that various traditions were brought together to create Anglo-Saxon Christianity. It was not a wholly imported religion, but one that was developed over time, by combining these various threads of traditions. The author argues that while it is easy to assume that Rome spread a “dull-grey, blanket-cloud of Rome-centered uniformity,” the reality was that much of what later become definitive Roman theology and practice was actually developed outside of Rome –much of it in Anglo-Saxon England (p. 4).
Mayr-Harting explicitly states that he was not superseding prior narrative overviews of the English conversion, but to focus upon how this conversion came to redefine the society of the people involved. By looking at the traditional accounts of the English transition toward Christianity, he supplements the narrative by considering how specific individuals and activities both were created by the Christianization, as well as how they influenced their surroundings. In addition, he highlights this symbiosis of action between the people, events, and culture.
Another important task of the book is to show that some previous assumptions are possibly mistaken, such as the importance of the Council at Whitby, which Mayr-Harting considers to be mainly important for Northumbria, rather than the whole island. He also argues that many of the converting nobles were older, while younger kings often remained pagan, indicating that the older leaders had no fear of adding the Christian God to their stable of deities, since the younger generation would continue the old ways (p. 7).
Finally, the book reminds the reader that the events discussed did not occur in a vacuum. The writings produced by Bede and his contemporaries were often influenced by specific historical events, and even other writings. For example, Bede composed his Ecclesiastical History at the same time as he wrote De Templo, an allegorical study of the Old Testament Temple. The two works complement one another, and to use them singly causes the reader to miss some of Bede’s intention (p. 9).

The Sky Is My Witness: Prologue to Battle