There is a secession movement afoot in California. The cynic in me thinks that this issue was settled in 1865, but to many people, things are never settled until they’re settled in the way that they like.

What would this last election look like without California? To start with, we need to recalculate the Electoral College. As a refresher, the States select a number of Electors based on how many Representatives and Senators they have. To arrive at that count, each State gets two Senators and at least one Representative. Other Representatives are allocated according to the population of each State. Since 1941, the Method of Equal Proportions has been used to calculate how many Representatives are allocated to each State, with a limit of 435 for the entire country. Using the population figures that the Census Department used for allocation following the 2010 Census (pdf), what would happen if California was no longer a State? Assuming we keep 435 Representatives, here is how the Electoral College changes:

Thirty-four states get more Electoral Votes.
Looking at the popular and electoral vote totals (Retrieved from the election authority of each state, or, if that was not available, a large newspaper in the state capital on Wednesday, November 23, 2016):

There would have been an even stronger Electoral Vote landslide for Trump if California was not part of the Union. And not only that, he would have gotten a plurality of the popular vote. To sum up: 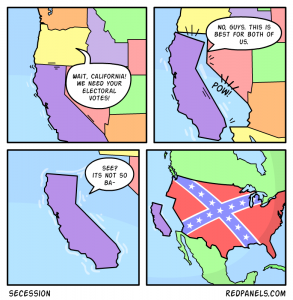