Some people in California want to secede. At first glance, there are some positive things that would result. We would instantly lose 55 blue electoral votes and we probably would never face a Democrat threat to the presidency again. More thoughts on that were discussed here last year. Smaller states would get a bigger proportion of representation. All the illegals in California wouldn’t be our problem any more, and leftists from all around the country would want to move there. The perverts in Hollywood wouldn’t be Americans anymore. California is the epicenter of everything filthy in America. 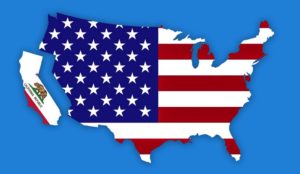 But there are some other things to consider. First, there are important military bases located there. The US could just keep them, and they would function like our bases in other countries. California would probably not like this. There are also important ports and industries. A lot of our imported goods come through Californian ports. There are railroads bringing those goods through. There are also canals bringing water to California from the Colorado River. I doubt that California can survive without it. We are linked with them and the ties are difficult to sever. It’s not certain that the federal government would just let them go peacefully.
California is also not united, just like the rest of the country. Some counties went to Trump; and some lopsidedly so. Those people wouldn’t want to go along with California, and the situation could easily devolve into a civil war within the state. The lines would be drawn between rural and urban, and the cities simply can’t survive without the food produced on the farms.
Once separated, California would be vulnerable. They would certainly give citizenship to all their illegals, and they’d probably push to be annexed by Mexico.
It is a good representation of the problem in the entire country. California is symbolic of the leftist rot and moral decay that is occurring everywhere. It is extremely difficult to excise this cancer. The problem isn’t going away any time soon. We must understand that difficult times are ahead, because it is certain that things cannot continue as they are. As Men of the West, we must raise our children right, be ready to fight for our rights, and pray to the Lord for His assistance.

Video: The Western Tradition, Part 16 – The Fall of Byzantium

Preserving the rule of law