World Net Daily recently published an article[1] titled Female Athletes Crushed By ‘Women Who Were Once Men’.  The article documents a number of instances in which biologically male transgenders  have been allowed to compete in women’s events and, in some cases, have already begun winning.  The two most notable examples are:
“Transgender weightlifter Laurel Hubbard, who was born a man, won the Australian international women’s competition March 19.  Hubbard, 39, lifted 591 pounds, nearly 20 pounds more than the woman who won the silver medal…”
“Transgender cyclist Jillian Bearden, a 36-year-old biological male and Colorado Springs native, won the women’s division of the El Tour de Tucson in four hours and 26 minutes in November 2016.”
This should not come as a surprise, given that the most athletic women in the world achieve results similar to boys in their mid-teens.  To establish that fact, below are the women’s Olympic records for a number of track and field[2] and weightlifting[3] events[4], with the U.S. boys’ records[5] for comparison:

As the reader can see, in most track and field events and weightlifting classes, a peak physical condition, elite adult woman athlete performs about the same as an elite 15 year old boy.  But then, those were all individual events – perhaps women perform relatively better as a team and increase their physical performance through teamwork.  However, there are few examples of all female teams playing against all male teams in official competitive events.  There ARE examples of all female teams playing all male teams in scrimmages and unofficial matches, so that’s all the evidence we have to consider.
In many cases, women’s international teams will play against boys’ select or boys’ international teams because there simply aren’t enough elite womens’ teams to practice against.  The results of such games are surprising.
The U.K. Daily Mail reported on May 27, 2016[6], “Australia’s national women’s soccer team have suffered a devastating defeat in the lead up to the Rio Olympics – going down 7-0 to the Newcastle Jets under-15 boys side.”
Sweden’s “The Local” reported on January 16, 2013[7], “Sweden’s women’s national football team suffered a crushing defeat during a friendly in Stockholm on Tuesday… Within 30 minutes, the boys had plucked one goal from the women, despite [Sweden’s coach] asking the AIK under-17 team to take out one of its defenders and play with only 10 players on the field… The AIK boys ending beating their older, female colleagues 3-0.”
On April 23, 2013, the vaunted U.S. Women’s National Soccer Team played the U.S. Boys Under 17 National Team.  The result was 8-2 in favor of the boys, with boys’ forward Junior Flores tweeting[8], “Beat the women’s national team today, and scored two goals. Sorry hope solo” and “we won 8-2 :O lol I scored 2 goals”. [Ed note: This users tweets are only available to those who are approved by Flores].
US Women’s National Team Defender, Heather Mitts, tweeted[9], “My horse wasn’t as fast as my opponents today. #demoralizing”.  Similarly, US Women’s National Team Midfielder Shannon Boxx tweeted[10], “What a day. Scrimmaged U17 USMNT. lets just say i can barely walk tnite.”

In an article dated August 22, 2008 and titled, “Olympian Political Correctness”[11], Todd Gallagher interviewed Aaron Heifitz, publicist for the US Women’s National Soccer Team.  Heifitz “described how the women’s squad performs against the best youth club players in Southern California: “The boys’ 13s we can handle pretty consistently, but when the boys start really developing at 14, and especially 15, that’s when you start to see real separation and they pass even the best women’s players. They’re just bigger, stronger, and faster.”
Perhaps women’s soccer is less developed than other women’s team sports.  Maybe hockey will provide us with an example of higher level performance from women’s teams.
NESN published an article on January 12, 2014[12] titled “U.S. Olympic Women’s Hockey Team Preparing for Sochi Games by Playing High School Boys Teams in New England”:
“The most recent opponent on Team USA’s schedule was Dexter Southfield, which defeated the U.S. Olympians 6-3 on Sunday afternoon… Here’s a recap of Team USA’s recent pre-Olympic exhibitions against New England schools: 3-1 loss to the Salisbury School in Connecticut 2-1 win over the Taft School in Connecticut 5-2 win over Saint Sebastian in Needham… Team USA is under immense pressure to bring home the gold as the top-ranked women’s team in the IIHF world rankings.”
Once again, we see that elite women are  challenged by elite teenage boys.  But what about sports like tennis, golf, and billards?  Can women compete against men on equal footing in those sports?
Golfweek Magazine covered the issue in regards to golf[13]: “While there is no rule against women playing in PGA Tour events, only a few have attempted the feat and, as of 2012, no female golfer has succeeded in finishing a men’s tour event.”
In 1998, the UK’s The Guardian Newspaper and the AP covered an interesting pair of tennis matches[14] in which a men’s player ranked 203rd in the world played one set against first Serena Williams and then against her sister, Venus.  The Williams sisters were up and coming women’s players and Venus had already made the final of the U.S. Women’s Open.  The 203rd ranked male player defeated Serena 6-1 and then defeated Venus 6-2.
More recently, in 2013, Serena Williams has stated[15], “If I were to play [top 5 ranked male] Andy Murray, I would lose 6–0, 6–0, in 5 to 6 minutes”.
One would think that billiards would be a sport in which physical characteristics such as speed and strength would not be as significant an advantage for men.  Yet, “Jeanette “The Black Widow” Lee — formerly the world’s Number One female player — told Gallagher, “You would not believe the amount of men, in my world, who can wax me.”[16]
Science blogger at Unz Review, Razib Khan, looked at the science and stated[17], “… the very strongest female athletes are barely above the median of grip strength for men. The top 75th percentile of female athletes are below the bottom 25th percentile of men…  Ten percent of women have stronger grips than the bottom five percent of men. The difference in distributions is big enough that the very strongest non-elite athlete female in the whole data set has a weaker grip than most of the men.”
Indeed, that grip strength difference was noted in regards to Fallon Fox – a biologically male transgender who is fighting in MMA [Ed. Note: We originally stated that Fox fought in the UFC, but revised to MMA, after this error was pointed out in the comments below].  In a 2014 fight[18]:
“On Saturday, Fox defeated Tamikka Brents by TKO at 2:17 of the first round of their match. In addition to [a] damaged orbital bone that required seven staples, Brents received a concussion. In a post-fight interview this week, [Brents] told Whoa TV that “I’ve never felt so overpowered ever in my life.”… “I’ve fought a lot of women and have never felt the strength that I felt in a fight as I did that night. I can’t answer whether it’s because [he] was born a man or not, because I’m not a doctor,” she stated. “I can only say, I’ve never felt so overpowered ever in my life, and I am an abnormally strong female in my own right. ”  His “grip was different,” she added. “I could usually move around in the clinch against…females but couldn’t move at all in Fox’s clinch.”
Where does all this leave us?  Well, it certainly doesn’t prove that any particular man is “better” than any particular woman at any particular physical activity – athletically elite women are likely better than the average man at “x” sport.  It also doesn’t prove that men are “better” than women in general – athletics and physical performance are of limited value and both genders have relative strengths and weaknesses.  Physical strength, speed, agility, and the like tend to be significantly higher in males.  This is largely “due to men, on average, having greater muscle mass—and a larger portion of it is fast-twitch, which allows them to generate greater force, speed, and anaerobically produced energy… [and men typically have] less body fat, more hemoglobin and muscle mass, and larger hearts and lungs than women.”[19]
It’s just the way things are, always have been, and always will be. 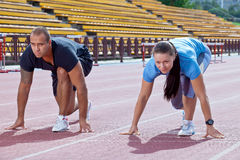 Libertarian to Alt-Right: Flight from Utopia

More on the Muslim Question