A few years back I undertook a little study of the Virgin Birth and its history as a point of Christian doctrine.  In doing so, I came across a funny article (now about 15 years old) by Nicholas Kristoff of the New York Times. He seems a little perturbed that everyone believes in it:

So here’s a fact appropriate for the day: Americans are three times as likely to believe in the Virgin Birth of Jesus (83 percent) as in evolution (28 percent).

That number, according to Kristoff, includes not only 91% of Christians, but 47% of non-Christians as well. Now, what made me laugh is not that more non-Christians believe in the Virgin Birth than believe in evolution, but that America’s public schools teach one and not the other. If Kristoff and other lefties at the Times would follow the logic there, they would conclude that the best way to get Americans to believe in evolution would be to ban it from schools. That’s not really a recommendation. I’m just saying.
But I do have to laugh at what passes for argumentation against the Virgin Birth as an historical-religious assertion. For example,

Jaroslav Pelikan, the great Yale historian and theologian, says in his book ”Mary Through the Centuries” that the earliest references to Mary (like Mark’s gospel, the first to be written, or Paul’s letter to the Galatians) don’t mention anything unusual about the conception of Jesus. 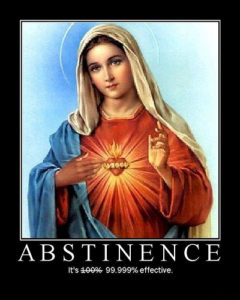 Paul never mentions Mary in a single one of his letters – that Galatians gets included as an “earliest reference to Mary” just highlights Kristoff’s ignorance here. The man simply doesn’t know what he’s talking about.
That said, this is a textbook example of the argument from silence, the assertion (usually smuggled in as mere assumption) that because a writer does not mention something, he is ignorant of it. But for what reason should we expect Paul to include a description of the Virgin Birth in this letter about freedom from the law? The objection is even sillier once it is noted that Paul’s letters which appear after Luke wrote his Gospel still do not contain any allusions to it. Why not? The doctrine of the Virgin birth was simply not a topic Paul needed to address in his extant letters.
Mark, for his part, does not mention anything in Jesus’ life before he was thirty. Are we then to presume that Jesus sprang into being at that age and gave his first sermon? Jesus’ birth, circumcision, haircuts, favorite pets, and trips to Disneyland are not subjects Mark chose to address. That he did not know of them is one possible explanation for that absence. To make it the only possible explanation is foolish.
There’s a reason the argument from silence is a fallacious generalization. The argument that something does not exist because someone does not mention it is incredibly dangerous in form, having as it does no positive evidence in its favor and needing only a single piece of evidence to overturn it. Plenty of biblical scholars have eaten crow because they argued, for example, that there were no such people as Hittites or that there was no writing in Moses’ day. You’d think that after three centuries they would learn. But when you consider that Mark, which might or might not be “the earliest” reference to Mary, was written within a handful of years of Luke and Matthew, both of which teach the Virgin Birth in full, you’ll see that it’s not just a silly and lame argument, it’s fatally subjective. The only reason he cuts “earliest” off at Mark is because the rest of the evidence is against him.
The next one is better:

The Gospels of Matthew and Luke do say Mary was a virgin, but internal evidence suggests that that part of Luke, in particular, may have been added later by someone else (it is written, for example, in a different kind of Greek than the rest of that gospel).

“Internal evidence suggests…” is a nice way of saying “if you look really really hard…and twist.” The fact is that all non-fragmentary copies of Luke and Matthew, including the earliest ones, contain the Virgin Birth stories. All of them. So there is no documentary evidence upon which to hang such a “may have been.”
When Kristoff says Luke is “a different kind of Greek,” he does not really mean that – all of Luke is written in Koine Greek. What he means is that the early section contains Hebraisms, Hebrew figures of speech. Which does actually tell us something, since Luke is a Gentile. Hebraisms are evidence that his information came from a Hebrew-speaker and is recorded in her* own words as much as possible. Vague asides aside, there is no evidence that Matthew’s account was added later, either. Unlike the story of the Woman Taken in Adultery, for which there is evidence of later addition, Virgin Birth stories are part and parcel of the original gospels as written.
But the saddest comment is this:

As the Catholic theologian Hans Küng puts it in ”On Being a Christian,” the Virgin Birth is a “collection of largely uncertain, mutually contradictory, strongly legendary” narratives, an echo of virgin birth myths that were widespread in many parts of the ancient world.

And it’s sad because it’s so undeniably deceptive. “Virgin Birth myths” do not appear in Jewish literature, not even (as I have argued elsewhere) in Isaiah, which is absolutely necessary to square with the hebraisms mentioned above. Myths that appear “in many parts of the ancient world” do you no good if they do not appear among the people who wrote the Gospels. Nor do the stories from the rest of the world square with the word ‘virgin’ – they are usually just stories of horny gods seducing beautiful women. What Küng and others do is generalize that Romulus and Remus were the sons of a god, and Jesus was the son of God, therefore Gospel stories are an ‘echo.’ That is not the way to do science, kids.
Secondly, if one actually bothers to read Luke or Matthew, it will be obvious that the narrative is anything but “uncertain”**. They give names, dates, genealogies, kings, places. Luke in particular is as historically anchored as any piece of writing in the ancient world.
But lastly, while the accounts have differences – else they should be obviously copied one from another – the two accounts are no more contradictory than are accounts of the same football game carried in the newspapers of the teams’ home cities. Matthew knows nothing of Mary’s thoughts but gives us great insight into Joseph’s. Luke knows nothing of Joseph’s mind but catalogs all of Mary’s worries and joys. The best explanation for these facts ought not be hard to figure out.
But the final argument, that it’s “strongly legendary,” is not hard to understand, and it is within this assertion that we find the real objection. Hans Küng, as he explains in What I Believe, sees “nature miracles” as violating natural law, which is not to be allowed. We are not to wonder if miracles “really happened,” but to concentrate on their meaning*** instead. In short, Küng, like Kristoff, and like so many of the Biblical scholars to which the latter appeals, holds a philosophical objection to miracles. All miracles. He would not look twice if the Luke says Jesus was potty trained****, because that does not mess with his philosophy. But miracles are not allowed in his conception of the universe – divine intervention in nature is a “violence” (his word) that he will not allow. Show me a theologian who disbelieves in this miracle, and I’ll show you one who classifies them all as legend, a priori.
Therefore the problem is not with the two millennia old “great intellectual traditions of Catholic and Protestant churches” that Kristoff bemoans the death of: most Christians have always believed in and taught the Virgin Birth. The problem lies instead with the three century old philosophical school of materialism that does not allow it.
But fear not, Nicholas, that’s dying, too.
* I’m pretty sure it’s the lady pictured. After all, who else would know?
** A book that begins, “A number of attempts have been made to put together in order an account of those events which took place among us as they were handed down to us by those who saw them from the first and were preachers of the word. So it seemed good to me, having made observation, with great care, of the direction of events in their order, to put the facts in writing for you…” Luke 1:1-3 (BBE) is not dealing with uncertainty in the mind of its author.
*** Why an event that didn’t really happen should have meaning I don’t know.
**** Which he doesn’t. Enter argument from silence here.