Is Washington also amongst the prophets?
We’d better hope not:

No People can be bound to acknowledge and adore the invisible hand which conducts the Affairs of men more than the People of the United States…
[but] we ought to be no less persuaded that the propitious smiles of Heaven can never be expected on a nation that disregards the eternal rules of order and right, which Heaven itself has ordained…
— Washington’s First Inaugural Address, April 30, 1789

Eternal rules of order and right like this one:

[F]rom the beginning of creation, God made them male and female. For this reason a man shall leave his father and mother, and the two shall become one flesh; so they are no longer two, but one.
— Mark 10:6-8 NASB

Whatever the specific “constitutional” arguments in favor of the Supremes’ gay marriage ruling, or their continued rulings legalizing abortion or chucking Christ out of our national life, there can be no doubt that in addition to overthrowing millennia of Western culture, our highest court has arrogantly disregarded the eternal rules of order and right which Heaven itself has ordained. Jesus here is quoting from the very first chapters of the very first book of scripture. If ever rules of order were ordained by Heaven for men, that marriage is a joining of a man and a woman is foremost among them. But our courts claim to know better than God, to be fairer than God, less bigoted than God, more modern and sophisticated than God.
Of course, one can always argue that God isn’t real or that if he is, he doesn’t really care what people do in their bedrooms or what nations do, despite what’s spelled out in scripture. That’s a very modern and sophisticated thing to say, and all sophisticated, modern people say it, including the leadership of lots of churches. They had better hope that’s the case. 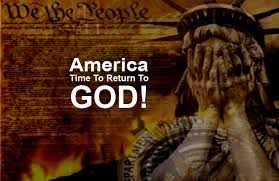 Because if our founders were right, if our first President in his first inauguration speech was right, we can fully expect that the propitious smiles of Heaven, which Washington credited with our successful secession from England and the establishment of our nation, to frown mightily when this arrogant nation spits that blessing back in God’s face.
If the Social Justice Warrior Left gets its way, the blessings of liberty, the blessings of prosperity, even the blessings of peace will be removed from America. This is not a prophecy, for I’m no prophet. It is a simple matter of recognizing God’s character and ours, God’s purposes and ours as expounded by our founders, those dead old white men who were so silly as to believe that the Creator of the universe cared about them, their freedom, and their prosperity.
Many moderns laugh and dance and celebrate the end of such superstition, but we will not be able to say we were not warned of the consequences by your own founders. Not that it will help us see it coming, I suspect: a nation that turns its back on God is in no position to see God turning His back on them.