America was built by the strong. 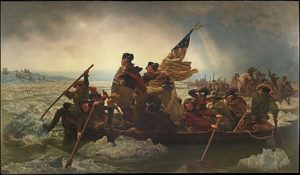 Not all of them were in a strong position. Some were slaves, some worked for unfairly low wages. Some were imported from China to be exploited for their labor to build the railroads.  (We say that’s wrong, while we exploit cheap Mexican labor.) We tamed the west, built the cities, cut lumber, mined ore, built farms and ranches, and we did it on the backs of strong men and women. Men knew how to work. They had to do hard physical labor. Women worked very hard too. There were no washing machines, or dishwashers, let alone microwave ovens, or even electric ones. Every aspect of life was more difficult. You had to be tough or you wouldn’t survive. Weakness was something you fought through. You didn’t want to be a burden upon others. The men wanted to support their families, and the women wanted to support their men.
Today, things are different. Weakness is almost celebrated. People at Walmart ride scooters because they are too fat to walk. They need the exercise more than anyone. Obesity is going to kill them, and they are fine with it. People are accustomed to handouts. They feel entitled, not embarrassed. We take from those who have earned it and give to those who have not. This provides an incentive not to do well or it will be taken away, and an incentive not to work and ‘help’ will come. That should scare the hell out of us, but we accept it as the new normal. Weakness is rewarded and cultivated. Why, when life is so much easier, are people so much less emotionally secure? One hundred years ago, if you didn’t have a job, you faced starvation. Today, the poor are obese. The rich have every convenience and luxury. Yet we as a country are a neurotic mess. Having a therapist is like a status symbol.
I’m not talking about the thousands of young men that we sent off to fight that saw the horror of combat and came home broken and unable to get back to normal life. That is real damage, and the way we treat those men is a national disgrace. They need help and we should give it. I’m not talking about true mental illness. Mental illness is a bad thing. We shouldn’t look down upon the mentally ill. Instead we should try to make them well.
A new trend is the “support animal”. Dogs are great, because dogs always love you, unless you severely mistreat them, or get some sketchy breed like a pit bull. The weak get dogs because they are comforted by the animal’s love. Some people even get cats. Cats will pretend to love you, so that works too. Where it all goes silly is when you are so neurotic that you have to take your pet to a place that animals are normally not allowed, because you can’t hack it without them. Seriously, America?
That brings us to this story. A young woman claims Spirit Airlines forced her to flush her support hamster down the toilet. What actually happened, was the airline refused to let her bring the rodent on the plane. She then made the decision to flush the hamster herself rather than miss her flight. We can speculate further that this woman probably tried to abuse the ‘support animal’ loophole and get her pet on the plane with her.
Another woman tried to bring a peacock on a flight with her.  I can’t believe these people have the nerve to complain. They are obviously so self centered that they think the other passengers must 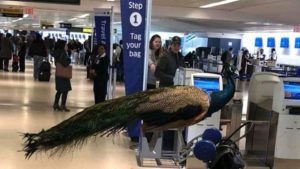 accommodate their animal. I don’t want to share a flight with someone so emotionally unstable they can’t make it without their pet peacock. I will not be convinced that you need to go somewhere that badly if you can’t leave your animal at home.
The truth is, when push comes to shove, that if you flush your animal down the toilet to make your flight, you didn’t really need that animal. And if you don’t get on the airplane because they won’t let your peacock on, you didn’t need to go that badly. The airlines should be commended for not allowing this nonsense.
If you find yourself in need of a support animal, know that this is not acceptable. I mean that you should not accept yourself in this condition. Your ancestors were not this weak, and you dishonor them by being this weak. It is a certainty that life won’t always be so easy in America that such weakness will be something you can get away with. Advertising weakness could turn you into an actual victim. There may come a day where you have to be strong just to survive. Become strong.

Culture is race – The doublethink.