There’s been a lot of talk over the outgoing editor of Christianity Today Mark Galli calling for President Trump to be removed from office.  The political hoi polloi have spent a lot of airtime and ink today trying to figure out what this means.  Michael Wear, a former Obama staffer specializing in Evangelical Outreach and self described friend of Galli, thinks that it’s an important statement because it will give cover to Evangelical leaders who don’t like Trump but are scared of speaking out for fear of backlash.  (archive.is version)

This editorial—which is itself the product, in large part, I believe, of the paradigm-shifting and relentless writing of Michael Gerson, Pete Wehner and David Brooks among a few others—is going to provide cover and permission for an entire cohort of evangelical elites who felt that if they made their views plain they’d a) be wasting their time b) be out on a ledge alone c) be “outside of their lane.” This editorial will help address all three of those reservations. The impact of this editorial is going to be in the pastors and non-profit heads who are sharing this with their staffs and the decisions that flow from those conversations. The leaders who now feel they can share this editorial or other political news, privately or publicly, who wouldn’t have before.

I think that is actually a pretty good explanation of what we are seeing.  Everybody knows that the impeachment is a farce.  For all the 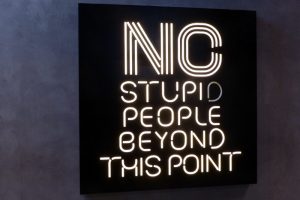 Democrats’ circus, they haven’t changed anybody’s mind.  If it was legitimate, they’d be able to peel off a handful of Republicans to vote for it.  Instead, we saw 2 Democrats vote no and Tulsi Gabbard vote Present.  It is amazing to me how closely people’s opinions on whether or not President Trump should have been impeached and whether or not he should be removed from office track with how that individual feels about Trump personally.  But having read this, it is clear that at least one aspect of this impeachment is to give cover to the David Brooks, Ramesh Ponnurus, Mitt Romneys and others who are in the “conservative movement” or the “evangelical movement” who hate Trump with the passion of a thousand burning stars but can’t attack him because they would be unmasked as operatives working to advance the agenda of the “other side”.
What we are also seeing is the intellectual lines breaking in the Church in the United States.  The Southern Baptist Convention over the summer legitimized the use of Critical Race Theory and Intersectionality in teaching.  And while it should be noted that many claim that it’s not the intent of the resolution, what the resolution says and what the people who submitted it wanted it to be are two entirely different things.  (if you’re not familiar with Critical Race Theory and Intersectionalty you can find my thoughts on it here).  It is clear that the time has come for the Southern Baptist Convention to die and for the Bible believing churches to form a new convention.
Likewise, we have seen the Methodists this past year reaffirm their commitment to marriage and morality as passed down by God through the Scripture.  I am not a Methodist, but I am led to believe that January 1, 2020 we are going to start seeing some serious changes in the denomination.
But Trump is very much causing people to show their true colors.  We have for years had politicians who said the “right” things but did precious little when they got into office and were lauded by the Evangelical Establishment.  And now, we have a guy who despite his flaws has done more for the Pro-Life cause than any other politician since the Supreme Court’s foolish Roe V. Wade decision.  Orange Man Bad, but when it was Mitt Romney running, the man who was more pro-abortion than Ted Kennedy, they were confident he warranted the trust of the movement.
Franklin Graham called out Christianity Today (archive.is)for what they have done.  And he’s right.

But it’s more than that.  It’s past time for the Church to quit with this nonsense and get back to the work to which the Church is called to do.  The American Church has spent the past 50 years infighting with Marxist takeover attempts.  It’s time to say enough is enough and get back to sound doctrine.  The Methodists appear to be on that path.  Hopefully the Baptists will be too.

Combat Tips From an Old Doggie

Friday Music: You Talk Too Much (George Thorogood)