If 2016 has shown us anything, it is that the traditional message of the right wing can no longer win even a plurality of one of our two major political parties. That message has long been some combination of smaller government, less spending, lower taxes, increased freedom, and protecting the Constitution. That message not only never worked as a governing program, it also no longer resonates with a sufficient number of voters to win electoral majorities. Election after election has given us bigger government, more spending, less freedom, and an ignored Constitution.
A positive aspect of the Trump campaign is that both parties have finally ended with the pretense that voters want the right wing agenda. Voters want a government that works for them. As anathema as that sounds to the conservative and libertarian intelligensia, that is the unfortunate reality of our times. Even an undercurrent of the tea party movement’s resistance to Obamacare was rooted in a fear that the funds to pay for it would come out of Medicare. 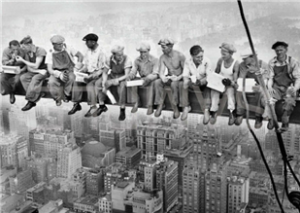 Given that the old message has failed as both dialectic—a coherent philosophy of governing—and as rhetoric—campaign messaging to win elections—we should start anew. The America in which a message of limited government could succeed in rallying the voters to the polls no longer exists. The causes are many, and should be explored in a later column. Needless to say, the times are not changing—they have already changed. In one sentence, here is my attempt at a new vision for the right wing:
America should be a society where a man working full time can provide for his family using only one income.
That should be the message of the Republican Party in 2018 and beyond, as well as the message of the right wing institutions in all their forms: think tanks, seminars, magazines, oped columns, online media, blogs, and social media. There is no reason that the left wing should own this issue. Families and the provisioning thereof should be of prime importance to the party of family values. Every policy proposal should be measured against this vision and fought on those grounds.
Families are vital to Western Civilization, both in the present and even more so in the future. They are the institution that it is most vital to conserve. The West will not be saved by lone rangers, nor was it won by them. The West was won by the homesteading family venturing out into the wilderness and reclaiming it for civilization. They followed in the footsteps of Isaac when they built their altars, pitched their tents, and dug their wells. Lone rangers need none of those things, but civilization does. We must create a society where families once again build their homesteads and reclaim what has become wild again. America needs to be a society where a man working full time can provide for his family using only one income.
That is my vision for a new right wing message. What’s yours?

Where do Neoconservatives Come From?