A week ago today, Donald Trump became the President Elect of the United States of ‘Murica.  The anti-Trump protests are not only still going, they’re intensifying. I could fill this page with hundreds of images and and videos and news stories showing people getting out of hand, breaking windows, starting fires, beating perceived Trump supporters, shouting anti-White epithets and generally acting like complete idiots. You’ve seen plenty of that already. 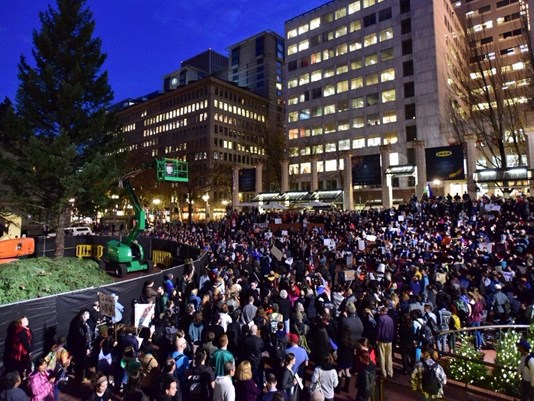 Who has time to riot for a week? Do these people not have jobs? If not, shouldn’t they be looking for jobs or starting businesses or doing neighborhood watch to reduce crime or mentoring the children in their community? Maybe they should be reading books, learning a trade, going to church, helping the poor or volunteering at the community center. I can’t imagine any bigger waste of time or energy than protesting a legitimate election. How many of these people are on welfare, food stamps and every other single government program they can get their filthy hands on? Probably most of them. People with jobs and families to feed don’t riot unless there is tangible, palpable injustice.
Sure, if there were widespread accusations that Trump was elected because of fraud I might at least be sympathetic. But they’re protesting the guy that won despite massive fraud on behalf of his opponent! I can understand how people might be upset if the loser of the election was a vaunted saint; a person of the highest integrity and a true freedom fighter. But rioting because Hillary lost? Are they really that stupid? Why, yes, they are. It’s not just minorities rioting, it’s college students. They’ve been so brainwashed, so inured to leftism, that they’re truly afraid. I blame the parents.
And it’s only going to get worse. It will die down over holiday season. Some of these people will get temporary jobs. Students will go home for the holidays. In the days leading up to and including the inauguration however, you’re going to see widespread civil unrest unlike you’ve ever seen before. I don’t want it to happen but people are going to die.
Go home protesters and rioters! Crawl back in to your safe spaces, wear your diaper pins and go to counseling; you’re not going to change the election results. You’re not going to convince the Electors to flip their votes to Hillary. You’re not going to accomplish anything other than your own undoing. You’re poisoning yourselves, your families and the future generations of your community. Do you really want a war with middle class Americans that want to protect their way of life? This is how you make that happen. Do you have any idea what will happen once we lose what little sympathy and tolerance we have left? I don’t think you want to find out. We’re not going to start that fight, but we damn sure will finish it!

Where to Get Your News

A New Vision For The Right