Phone rings. I see it’s a local number I don’t recognize. Shit. Somebody probably with a nag that can’t walk and hasn’t been trimmed in a year, and won’t get trimmed again for another year. I let voicemail get it, and answer the third call the next day. 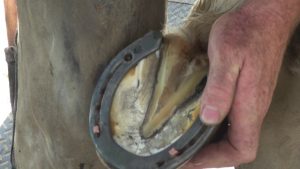 Me: – Yeah. (No sense in encouragin’ ’em)
Y – Um, I have some horses that need trimming and one in front shoes that needs to be reset.
Me: – Okay, How many need trimming?
Y – Let’s see…. 14. And the one in front shoes.
Me:- What are they?
Y – What are they??? Uh, they’re broodmares. Oh, and a weanling, and a yearling. And two stallions.
Me: – OK, what are they? (She’ll catch on in a minute)
Y – Oh, Quarter Horses.
Me: – When were they trimmed last?
Y – Well, they’re three weeks overdue.
Me:- (Deep calming breath) When were they trimmed last?
Y – Oh, we had ’em on an eight week schedule but, like I said they are three weeks overdue, so… eleven weeks.
Me: – Got it. Why do you have one in shoes. (It’s crippled…)
Y – Oh, that’s my baby. I’ve had her since she was a foal. She’s eighteen and I just want her to be comfortable. She has some calcium deposits on her knee and the vet in Wisconsin put special shoes on her. I have them if you want to see them. (These turned out to be cheap caulked shoes someone had beaten the toe square one. Not a bad plan except for the caulks)
Me: – The vet put shoes on her? (oh, shit, a Yankee know-it-all with a Yankee know-it-all vet.) What happened to her knee?
Y – It’s an old injury. The vet didn’t actually put the shoes on, my old blacksmith Larry did. I have them if you want to see them. I don’t care what it costs I just want her comfortable.
Me:- (Gets out the old schedule book) Let’s see…
Y – What do you charge?
This lady’s horses were extremely well behaved, had long enough legs to get under them (rare for modern dachshund-like Q-Horses), was appreciative of the work, but unappreciative of the bill. Hey! That’s a lot of horses! And one of the shoes on the old mare is a twenty dollar (my cost) shoe by it’s self. She’d have shit if one of the $400.00 (my cost) shoes had been required. Note the last question was not the first question she asked, as is often the case, and tells a farrier where the priorities are in their horse’s care. She is not your typical Quarter Horse owner that wants her horse trimmed in such a manner that it will win a show but become unsound down the road. (No, I don’t do that. There are plenty of jack-legs out there who will.) She does, however, think they do it better in Wisconson (Yankee – can’t help it) where everyone is smarter and knows quite a lot about horses, so we shall see how this one goes. After I saw her reaction to the bill, I didn’t reschedule her but told her to call in a couple weeks to reschedule. That will give her an out (by not calling) and time to find a cheaper farrier so she wouldn’t have to lie were I to call to confirm seven weeks from now.
Such is the life of a horseshoer.

Sermon: The Solitariness of Principle