Imagine, if you will, a beggar. He is found on the side of the road, too poor for a cup, simply holding his hand out, hoping that passersby will leave a coin. If you took the time to look into  his eyes, you would notice that he is blind. He cannot see at all.
Every day, you pass by. Every day, he sits in his spot, occasionally getting a pittance from random compassionate people. Over time, you may find that he is not homeless. He has a family who bring  him to his spot each day. His mother and father check in on him occasionally, but know that with his disability, there is little more he can do.
Then the world changes.
One of those compassionate folks stops, and rather than giving money, spits on the ground, makes a little mud, and rubs it on the blind man’s sightless orbs.
“Go wash your eyes in the pool over there,” says the stranger, before leaving.
What else could he do? He has spittle mud on his face, so the blind man goes to the pool, washes the mud from his eyes, and his blindness is healed. He can see.
Now, really, can you imagine how you would react? The man returns to his spot, but is obviously no longer blind. All those passersby look and start saying to one another, “hey, isn’t that old blind Joe?”  They are unsure, because who ever heard of a blind man being healed? Some believed it must be some other person who looks like old Joe.
Of course, I am paraphrasing the story of Jesus healing the blind man, found in John 9.
But my point here is not the healing itself, as powerful as that is. No, I want us to look at how this guy reacted to his gift of healing. 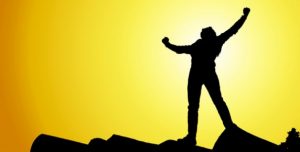 Imagine what he was like as a blind man. The scripture tells us that he was blind from birth. He had never seen his parents or anyone else. He would have most likely been a timid man, as he had long learned the lesson that people are usually mean. With no sight, he had little chance to react strongly to others, other than to hope that they would show him some semblance of mercy. But once he was touched by Jesus, everything changed. He gained more than his sight. He gained a backbone!
The Jewish leaders, upset about Jesus healing on the Sabbath, tried to badger the man, with the ultimate aim of humiliating Jesus. These leaders really cared little for the man himself, one way or the other.
They call him to task, demanding to know who healed him. He replied that he did not know (he had been blind at the time, of course). First the man simply answered their questions, with no elaboration. When asked who he thought the man who healed him was, he simply replied, “a prophet.”
Their first interrogation hitting a brick wall, they turned to his parents. “Who healed him?” The leaders asked again. The parents, fearing the leaders, since they had previously threatened anyone who supported Jesus, simply threw it back on their son, “ask him. He is an adult.”
Can you imagine that? If your child, blind from birth, had received healing from someone, would you immediately cast him aside – and your child with him? These parents did.
How does the healed man respond? Is he distraught that his parents have turned on him? There is no indication that he was. Rather, his boldness grows.
As the leaders begin to question him again, saying that “we know this man [Jesus] is a sinner…” the man stands up straight and responds, “whether he is a sinner or not, I have no idea. What I do know is that this morning I woke up blind, but now, I can see clearly.” The implication? You guys can stick your religiosity where the sun don’t shine. That guy did something, not just talk about it. You guys sure never did anything for me.
As the leadership became more belligerent, the man finally had enough. “Look, I have already told you guys this stuff. Why do you want to hear it again? DO YOU WANT TO BE HIS DISCIPLES, TOO?”
Imagine the chutzpah! He has gone, in a short span of time, from timid beggar to bold disciple of Christ – and he did not yet even know who Jesus was!
This is one of my favorite biblical stories, as we see the transformative power of Christ. He can take you wherever you are and transform you completely. I don’t care what you have done in the past. I don’t care what others think about you. I don’t care what your weaknesses are. If you allow Christ to enter your life and give you his gift of healing (and we all  need healing of one sort or another), then then you will become more than you could ever possibly imagine.
If you don’t trust me, just ask the formerly blind man, and listen to his response: “I already told you once. Why are you asking me again? DO YOU WANT TO BE HIS DISCIPLE, TOO?”

The Altar of Hate

The care and feeding of reloading dies