Is our culture falling apart right on time?

Sometime around the year 2005, perhaps a few years before or after, America will enter the Fourth Turning… a spark will ignite a new mood…
In retrospect, the spark might seem as ominous as a financial crash, as ordinary as a national election, or as trivial as a Tea Party…
[T]he following circa-2005 scenarios might seem plausible:
A global terrorist group blows up an aircraft and announces it possesses portable nuclear weapons… Congress declares war… opponents charge that the president concocted the emergency for political purposes.
An impasse over the federal budget reaches a stalemate. The President and Congress both refuse to back down, triggering a near-total government shutdown… Congress refuses to raise the debt ceiling. Default looms. Wall Street panics…
— William Strauss and Neil Howe, The Fourth Turning (1996).

As skeptical as I generally am about historical determinism and waves/cycles, I have to admit that I found the thesis of The Fourth Turning both intriguing and compelling. [Ed. Note: We have discussed this before: here and here]. It’s not just an assertion that certain kinds of events tend to happen every so often, but an explanation of why.  The authors of the best-seller Generations argue that not only do generations have an archetype or ‘personality’,* but that the interaction of those personalities ensures that an event that might be all but ignored in one era will cause a crisis in another. Just as one person might blow off an insult where another makes a blood feud of it, so do generations react to different stimuli differently.

Strauss and Howe’s cycle is called the Saeculum, which is loosely Latin for a long human lifetime.  Like the Kondrateiff Wave, each complete cycle is broken into four seasons. Unlike the K-Wave, these seasons are not merely economic, but social in every sense of the term. Society moves through a series of changes, with each successive generation molded by and reacting to the one that preceded it.  The results can be found in matters social, civic, familial, and economic. 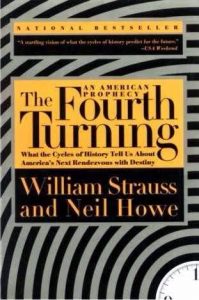 These four seasons of the Saeculum are separated by turnings, short periods of often violent and shocking transition. Each cycle starts with a First Turning that raises society from the depths of crisis into a spring-like high where everything is awesome (e.g. 1946-64). A Second Turning then rolls an unsuspecting nation into a summer-like Consciousness Revolution (e.g. 1964-84), in which a rising generation tries to find meaning in the prior generation’s creation. Failing, they rebel against the sterility and conformity that provided such comfort to their fathers.  Summer’s Third Turning rolls into an autumn Culture War (e.g. 1985 – ~2005) where the exposed contradictions fuel a society-wide struggle over values.  Finally, a Fourth Turning – kicked off by a clear event, or catalyst –  brings a winter-time crisis that burns it all to the ground, resolves the contradictions, and sets the stage for a First Turning into a new Spring.

Strauss and Howe assert something new is coming once again, just as it always has, though writing a decade before they expected to see it, they have only guesses as to what it might look like. Of course, much of the fun of reading a book like this lies in just that kind of guessing. And since this book turned 20 years old last year, we’ve had plenty of time to measure whether its prophecies are accurate.  So far, the answer is a firm and resounding maybe.

The catalyst that would kick off the current Fourth Turning, bringing us into a 20-year period of crisis and destruction and setting the stage for renewal, should have struck a couple years on either side of 2005. It had to light a fire big enough that its flames would burn for 20 years and change us entirely as a people. One early guess of the event was 9/11. It had all the makings of the kind of catalyst that could re-make society.

However, co-author Neil Howe is now certain that the catalyst is the 2008 Financial Crisis.  Our modern debt-based financial system could be consumed because it is built on a foundation of wishes and fraud, and when it burns, it has the potential to incinerate the entire modern world.  That’s the kind of thing a Fourth Turning does.

The Fourth Turning has some weaknesses as a theory of history. For example, following the Civil War it skips an entire generation, compressing 40 years of cycle into 5. Given the explanation that generations react in predictable ways to the one prior, skipping an entire generation like that undermines what is otherwise a reasonable assertion. The theory also seems to at least imply that the turning begins in earnest immediately following the catalyst, yet here we are a decade years after the 2008 crisis, treading water while printing fake money to inflate our lifejacket. I suspect that whatever breaks us out of our current economic stasis will be perceived as the real catalyst a decade late.

Whether the crisis we are facing is due to a Fourth Turning or just human sin and stupidity may be a distinction without a difference. And at least Strauss and Howe’s book gives some assurance that there may be light at the end of the tunnel, a new societal high in our near future.

May be. For here is the paragraph that follows the Fourth Turning introduction above:

The risk of catastrophe will be very high. The nation could erupt into insurrection or civil violence, crack up geographically, or succumb to authoritarian rule. If there is a war, it is likely to be one of maximum risk and effort – in other words, a total war. Every Fourth Turning has registered an upward ratchet in the technology of destruction, and in mankind’s willingness to use it.

The possibility exists that prepping and prayer will be enough to see us through to a new spring, where everything is awesome again and all the children are above average. But it may just carry us through a transition into what seems like eternal winter.

* Anyone who has ever muttered the phrase “#@&%ing Boomers” under his breath is already on board with this concept.

“The Gods of the Copybook Headings” by Rudyard Kipling