When people talk about long wave economics, they’re usually talking about the Kondratieff Wave or perhaps even the Saeculum, waves that last on the average 60-80 years from trough-to-trough.  But there are lots of other waves and cycles alleged to impact or guide our times. The longest of these is perhaps what historian David Hackett Fischer has identified as The Great Wave in the book of that name.
I was originally introduced to Fischer’s work in grad school, where we used his excellent Washington’s Crossing as a text for work on the American Revolution. The Great Wave is an even more important work today because, as we shall see, he has perhaps prophesied the history we will live for the next 30 years.
The idea behind the Fischer’s Great Wave is that there have been 4 “price revolutions” since the 12th Century ad.* These persistent inflations, defined as prices rising for so long that they become a societal expectation, have been divided by periods just as long where prices went nowhere, accompanied again by matching expectations. The transition years from each inflation to the following period of stability have been a time of trouble. Big trouble. Trouble squared, cubed, and loaded with gee juice.
The first crisis took place in what Barbara Tuchman called “the Calamitous 14th Century” in her fantastic exposition A Distant Mirror.  Famines, wars (including the Hundred Years’ War) and the Black Plague rolled over Europe in successive, bloody waves. The preceding inflation was smashed only by a significant reduction in population from Dublin to Istanbul. As European society was rebuilt from this crisis, the century-long price stability gave rise to the Renaissance and an outward-looking Europe. At its end, it rolled seamlessly into another century-long price inflation.
The second crisis, which began about 1600, unleashed an incredible number of wars and popular revolts upon Europe.  Europeans were seemingly always at war, but the increased intensity of the age and the brutal catastrophe called the Thirty Years’ War (1618-48) exacerbated the damage already done by the downturn in climate that became known as the “Little Ice Age.” Crops failed from Britain to Sweden on and off for decades, the Cantabranian plague swept the continent, and again rising prices were broken with a general societal upheaval. The century-long equilibrium that followed became the Enlightenment.
The third, which Fischer denotes as falling into the period of 1789 – 1820, will boast some familiar dates.  The French Revolution kicked off that first year, leading to continent-wide war and destruction. The “famine years” in Britain, caused by crop failures, were followed by “bad years” in 1808 and capped by “The year without a summer” in 1812, during which it defeated Napoleon at Waterloo but lost the War of 1812 to the United States.  Once again, falling temperatures and crop failures, wars and disease, broke Europe’s collective back and changed its maps significantly. Its effects were felt in the United States as well.
Now, I said all that to say this.  Fischer does NOT say that the next one will be bigger, nor the results worse.  Optimist that he is, Fischer concludes that government policies can mitigate the consequences of the crisis when it arrives, as it must. When he wrote the book in 1996, the date of its arrival could not be foreseen – inflation was still an expected part of our landscape.
I don’t necessarily disagree with his conclusions, for I don’t know to what extent government will either mitigate or prolong the crisis.  However, I do wish to note two facts, the first of which is discussed in The Great Wave, the second of which occurred after its publication. 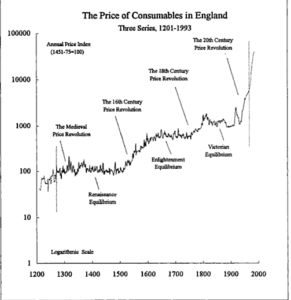 First, take a look at the graph – which I stole from Fischer’s Book – and note the magnitude of the ascent on this final wave.  Even on a log scale, it’s obvious that prices have risen over the last 100 years to a much greater extent than in any prior wave.  Part of this is due to our worldwide conversion to debt money.  But another part is due to something that Fischer notes has driven all prior inflations: a rapid increase in population. Not only have we destroyed our money in the last century, we have increased the world’s population fourfold. Our improved technology will struggle mightily with the magnitude of what we face when the current wave ends simply because it’s so massive and affects so many.
Second, since the start of the 2008 Financial Crisis, central banks have implemented seemingly countless “emergency” measures to perpetuate this wave of inflation. They have piled debt upon debt, reduced interest rates to virtually nothing, spent trillions sucking marginal debt from the system and replacing it with safer** government debt.  Yet try as they might, they cannot seem to keep the bubble inflated. Debt deflation struggles mightily with their beloved debt inflation. In a system where our money itself is debt, there’s is no telling which will win, only that the result will probably be decisive.
If we have reached the end of the latest Great Wave, we can expect our own crisis to last three decades or more before mellowing into the next century of stability.  If it follows the patterns of others, cooling temperatures will lead to crop failures, which problems will be exacerbated by international wars, revolutions and perhaps worldwide plagues as well.
The same high level of technology that might blunt the crop failures and limit the plagues also makes our weaponry deadly beyond what those of prior waves ever imagined. Plant a tree anyway.
* That’s “Anno Domini,” in the year of our Lord. “CE” is for pansies.
** You keep using that word.  I do not think it means what you think it means.

The Power of Tears