‘The fact that we are here today to debate raising America’s debt limit is a sign of leadership failure. It is a sign that the US Government can not pay its own bills. It is a sign that we now depend on ongoing financial assistance from foreign countries to finance our Government’s reckless fiscal policies…
Increasing America’s debt weakens us domestically and internationally. Leadership means that “the buck stops here.” Instead, Washington is shifting the burden of bad choices today onto the backs of our children and grandchildren. America has a debt problem and a failure of leadership. Americans deserve better.’
–Sen Barack Obama (D. – Ill), March 16, 2006

Of course he was merely grandstanding. He was playing to the cameras. He was whipping up the type of partisan foam that can get a young senator noticed.  And as soon as he could actually do something about the debt ceiling, he flipped his position*.
But Senator Obama was also saying what everyone knows to be true but refuses to deal with.
When Congress returns from its most recent 4-week vacation, they will take up once again the thorny issue of raising the debt ceiling.  And it’s called ‘thorny’ because it’s one of those rare opportunities where politicians get to tell the truth and vote in the interests of their nation, so long as they are guaranteed to lose the actual vote.  Everyone knows the game, everyone plays along. Because the alternative – not borrowing more money from tomorrow to pay for today – is unthinkable to a Congress and a people who live in the moment.
So what would happen if Congress failed to raise the ceiling?  The first thing that would not happen is default on its financial obligations, which is what everyone pretends to worry about.  The government takes in more than enough money to pay interest on the current debt**.
What would in fact happen is what everyone says they want to happen but no one really does: the budget would be balanced.
One of the strangest properties of government budgeting is how easy it is to cut the deficit in half.  Both Republicans and Democrats run on the promise or the feat of cutting the deficit in half. Bush promised to cut it in half on the way to doubling our national debt in eight years.  Obama actually claimed to have done it, while doubling that debt again.  But neither of them managed to rid us of the other half of the deficit. 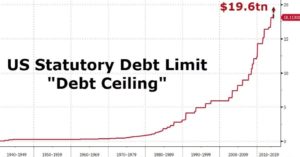 Cutting off congress’ credit card solves that problem immediately.  If you can only spend what you bring in, your budget is balanced or it is no budget.
But what about the pain?  What about all the people who won’t get what they’ve been promised? What about all the programs that won’t get funded?  What about Muh Washington Monument?
Well? What about them?  If those things are so important, then we should be paying for them today. If that means raising taxes, then that’s what it means.  If we don’t want to raise taxes, we don’t get to have the stuff.  It is simple theft for us to take the goods today and place the cost on future generations. Such a sin has enormous consequences on our nation, and they are not merely fiscal.
Republicans today control both houses of Congress and the White House, therefore America’s debt is a Republican problem.  The irony is that they are the party that has run for 2 generations as the people who were going to fix that particular problem by balancing the budget.
Now the fulfillment of that promise lies within their grasp.  They can deliver to you that balanced budget you’ve voted for since Lyndon Johnson was in the Oval Office. The mechanism for balancing the federal budget is already in place. The date of fulfillment is coming quickly.
All Congress has to do is nothing. 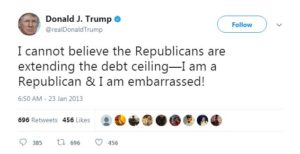 * Neither the hypocrisy nor the debt problem are attributes of one party, as our current president has made the same betrayal intellectual journey.
** Of course, ceiling-raisers will immediately change the definition of ‘default’ to include national parks and highway block grants, as if our grandchildren yet unborn have a moral obligation to keep today’s Yellowstone bus tours running on time.