When the British began to acquire large scale colonies in America, it was with the purpose of increasing Britain’s profits. Natural resources not available in the British Isles were cultivated and manufactured in Virginia, New England, and the other colonies. As the French and British began their long tussle over these colonies, the settlers themselves experienced a changing role and mentality. Until the middle of the 18th Century, the colonists viewed themselves strictly as citizens of Great Britain, and relied upon the homeland to provide governmental and military necessities.
However, as the conflict between the national powers continued to rage, there were necessary changes that had to take place. The population of the colonies increased significantly, leading to two major adjustments. First, colonists began to be used as volunteer military – a militia. Since France had the advantage in manpower, Britain utilized these civilians as part of a larger strategy in battle. Secondly, the colonies formed their own quasi-governmental bodies – assemblies and eventually congresses. “Culture and cultivation were active practices; they were immanent to relationships between people and between people and things. But just as important, this eighteenth-century linkage of culture to direction, and thereby to governance, existed in a British colonial world where competing and overlapping systems of governance were coming into being, intersecting, and struggling for dominance” (Meranze, p. 714).
These initial changes came because the early colonists were disorganized politically, and had no strategy to defend themselves against French military advances. Since the British military was primarily concerned with protecting the British Isles, there was a need for some kind of comprehensive plan for protection (James, p. 86). As the French advanced upon British America, the volunteers moved to stop them. Led by many future American leaders, such as George Washington, these skirmishes provided a sort of training ground for the conflict that would eventually erupt between the United States and Great Britain. 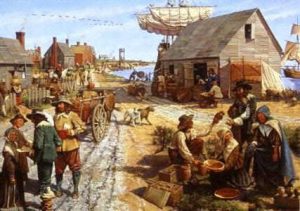 The British focus on increasing profit had created a viable society in North America that was capable of producing large amounts of various products, and provided for a solid infrastructure. However, the British forced the colonies to use British ports, not allowing for products to be shipped elsewhere directly, thereby ensuring a British monopoly on North American trade. The “Navigation Acts, which not only confined trade within the empire to British and colonial ships and seamen but ‘enumerated’ certain commodities produced in British colonies that could not be shipped directly to foreign countries. Among these products were sugar, tobacco, indigo, furs, and naval stores. Because the Navigation Acts allowed free and equal competition for shipping services between individual parts of the empire, merchants had many possible options with regard to shipping patterns” (Morgan, p. 507).
American subjects were increasing in number and beginning to identify themselves as Americans (still British subjects, of course, but American, nonetheless). “In the absence of a strong imperial presence or adequate machinery to enforce metropolitan wishes, the effective working of the empire depended on the willingness of local populations to cooperate. [By] the I760s the majority of the colonial elites refused to cooperate” (Marshall, p. 1). The infrastructure that existed was decidedly American, and focused upon American concerns. When assemblies were called in the colonies to address problems, they spoke as a unified body, often contrary to British political policy.
When Britain did send in troops to combat the French, they found a British-American population that had become more organized. During the conflict, many of the militia members gained valuable experience in combat, which would later be used against the “Redcoats.” This included strategies such as fighting a “bush war” (James, p. 90). The strategies proved successful in defeating the French, and the British found themselves with a new set of problems: appeasing former French subjects while providing the spoils of war to British colonists (James, p. 95).
The British military success, coupled with the solid financial and political infrastructure, led to a massive immigration to the North American colonies, where many hoped to find wealth. This was appealing to those with no prospects back in England (James, p. 95). The shift in population led to speculation that the wealth of Britain would follow (James, p. 96). In an effort to curb that possibility, Britain enacted more legislation that the colonists viewed as punitive.
“The determination of successive British governments to try to exert an effective imperial authority over the American colonies, while paying scant regard to the practical means by which such authority might actually be enforced is …a sufficient explanation of Britain’s role in precipitating the great crisis that was ultimately to lead to the reconfiguration of the British empire” (Marshall, p. 2).
It would seem that a sort of “American Independence” had been brewing when the first colonists came from Britain to the New World. Certainly, many were political and religious dissidents. The organization and development of this independent streak was not really codified until the mid-18th Century, when the various colonies began to work together to address common grievances, as well as the organization of militia. These actions proved so successful that massive immigration took place, leading to a potential shift in wealth, causing Britain to crack down on the colonists, which in turn fired the independence that had been on the backburner.

The Incoherence of Atheism