An important note: In these times of short attention spans, it is perhaps relevant to point out that this series is geared more to ensuring you understand when it is personally acceptable for you to strap on your armour, take up your shield and sword, and start chopping off the heads of Saracens, heretics, and other servants of evil, than in telling you to turn the other cheek.

The subject of war, fighting, and violence in general, whether in a spiritual, national, tribal, or individual context, is one that has been with us from the very start, and will remain with us until the very end.

To understand violence in a Christian context, and how one may choose to act in regard to it, one must first of all understand at least the basics of Christianity. You can get a primer HERE, but in essence it boils down to the general facts that: 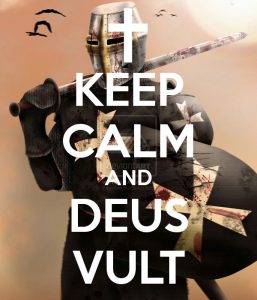 In other words, we are at war. Unless you are already a Christian, or at least accept the premise of Christianity that The Prince of the Air, (The Enemy, The Eternal Psychopath, Satan, call him as you wish) and his minions are currently in charge here, it becomes difficult to reconcile a loving God with reality. As to WHY Satan is “allowed” to be in charge (the constant complaint from all atheists) that is a relatively simple concept to grasp if you actually spend two minutes thinking about point number 1 above. Love does not end rebellion by force as a first instance. It would not be love if it did.

Love is compassionate, forgiving and merciful. That said, constant strife, injustice and evil cannot exist in the presence of infinite Love, so it makes sense that such creatures that exhibit such vile traits would be placed aside from loving ones. It is why we had mental asylums for the criminally insane. And that, in short, is where we are.

We also know how the story ends. After having given all possible chances, after having given all a chance to choose a side, after having sacrificed Himself as payment for our sins, so that we may be forgiven simply by us stating “yes, I accept your truth and Love”, at a time and hour that God only knows, there shall be a reckoning. And Satan and his kind will be cut off from God permanently. Because Infinite Love, which God is, also encompasses Infinite Justice.

Which brings us to the point of this post. Christian Warriors.

There are many facets of this topic, and I will cover them in future posts, but you can divide them into a few categories:

This post is a primer on the topic, to begin to formalise a few of the baseline concepts in order that an intelligent conversation can be had, as such it can be considered to cover the first point:

The Philosophy of Violence from a Christian Perspective

Christianity tells us several things, as we already mentioned, God is Love, and we are currently under the domain of the Prince of Evil. It is our duty whilst here to resist evil and await patiently the return of the King. How we resist, and how we wait, is essentially the subject here. There are, in essence, two primary modes of doing so, and they are perhaps best shown metaphorically in the film The Mission, starring Robert DeNiro and Jeremy Irons as the two sides of this coin.

But I am not here to tell you much about that, other than this: Beware those who advocate to you that you need to be a Christian Martyr, and beware too those who say they themselves are one or choose this path. Human beings genuinely willing to be Christian Martyrs are exceedingly rare.
What is not rare is the Churchian, a snake in the garden that will try and get you to submit to lies and all sorts of vileness in the name of supposed Christian Martyrdom. The coward who removes himself from the fight under the pretense that he is merely a pacifist, when in truth he is a violent deceiver. Beware these vermin.

That said, finally, let me tell you of that similarly rare creature, the Christian Warrior.

The Christian Warrior is fully capable of doing violence, and does so unhesitatingly and with a courage and dignity that has marked historical battles with valour and honour that live on hundreds of years later, such as the defence of Malta in 1565, the battle of Lepanto and many of the battles of the first crusade, now almost one thousand years in the past.

The Christian Warrior is a rare creature for a number of reasons, yet, precisely because of them, he is very much required today.

These are some of those reasons, listed here with only little explanation for now, see if you can reconcile them within yourself:

Given all of the above, I hope that it is clearer now that a Christian man who decides to fight instead of be a martyr has a number of qualities that make for formidable warriors:

In short, the difference between a Christian Warrior and a Christian Martyr is that whilst the warrior too is willing to ultimately be crucified if need be, he would rather see to it that the enemies are crucified first.

Such men are a rarity nowadays and yet they are much needed. The feminisation of the Churches, the pervading Churchianity first created by Protestantism and Catholic corruption, which has now galloped throughout the land with abandon, has dwindled, hidden and buried the ancient truths concerning Christian Warriors and the part they played in creating, securing and defending Christendom and the civilised West, the greatest civilisation humanity has ever produced.

It is time to rise from the slumber. It is time to awake. Remember your history. Read it if you do not know it, you can do worse than beginning here:

Remember, it is The Church Militant for a reason. If you are not fighting for the side of the light, what are you doing?

Do you know what it means to be Christian ultimately? It is merely this:

To love Truth more than a lie.
To love Love (and thus our loved ones too) more than life.
God is Truth and God is Love.

That is why Jesus said the highest of all laws is to love God with all your mind, soul and heart, for literally, all that is worth living and dying for, is embodied in, and comes from, God.

Do not listen to the lies of the Churchians, the Marxists, the feminists, the politically correct, the humanists, the secularists, the filthy lies of the social justice warriors in all their bloated excess of selfish insanity.

Truth is absolute, not relative. God is Love but we live in a realm under the domain of the Prince of Lies. It is our duty to fight back, to be beacons of light in the darkness.

And be sure of one thing: as soon as you recognise this, you will be set upon.
You WILL be attacked. We are warned of this too in the Bible of course, but do not despair, remember, despair is the biggest weapon of the Enemy.
Trust in God.

And, as King Richard the First said in his battle cry at the battle of Gisors in 1198:

And no, we do not refer to God and my Right as being “my divine right,” for there is only one king, and none of us is him. We mean it as God and my right hand; the one wielding the sword that shall cleave the skulls of the enemies of light.

(We can make an exception for all you left-handed sword-wielders, but only if you swing Hard Right).

On the Greatness of Football

White Is Right: Some Thoughts On Race