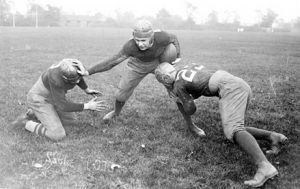 There are many elements of a society or culture that help to define it. For the Men of the West, few things are more definitive than Football, the greatest sport yet invented by mankind. While some folks want to disparage it as “bread and circuses,” the Men of the West recognize sport for what it is – a great activity that furthers our cultural aims.
Sport has always been a part of Western Culture. The Greeks, Romans, and the later European powers all reveled in the importance of physical sports. The Greeks played Harpaston, which is most likely an early forerunner of modern football (as are Soccer and Rugby). To deny the efficacy of playing sport is to deny the very essence of Western Civilization.
Football’s greatness is seen from two angles: external and internal. The former addresses how the sport impacts the culture as a whole, while the latter considers how it affects those who are engaged in the activity.
Socially-speaking, football encourages community. There is a reason that entertainers picked up on the fascination with “Friday Night Lights.” In small towns across America, entire towns put down their tools, close their shops, and head to the local stadium to cheer on their local team. It is a time when families, friends, and neighbors gather in unity to cheer for a common goal.
Some anecdotal evidence: after losing a hard-fought game against a rival school, Theophrastus was driving home, when a local Sheriff’s Deputy pulled him over. Approaching the driver’s side window, the officer complained, “Dammit man, y’all cost me a case of beer!  I had a bet with another deputy from the other town.” No ticket was issued. It was simply a time of communal commiseration. Ever after, when the two saw each other, one would mention the case of beer, and chuckle.
The fact is that small towns across the country join together in a very real way, thanks to football. Memories are made, relationships are tried and strengthened, and community is developed. It is a powerful thing.
Another important social aspect is intimately tied to personal relationships. There is a reason that the desirable girls chase after the football stars and not Chester the Chess Champion. It is not mere trickery or superficiality. There is something real and virile about a young man who willingly places his health on the line to gain victory for his community, and demonstrates his physical prowess. Young ladies recognize this, and respond accordingly. They instinctively know that if threatened, Joe Football is a much better protector than Chester.
There are those internal components to consider, as well. Are you interested in strategy? Sure, chess is strategic, and it is a fine game. It is also very two-dimensional. Pieces always move by the rules. Pawns will not act like rooks or bishops. On the gridiron, there is an element of uncertainty, where the opponent does not always do what is expected, nor remain limited within the rules. Football players must learn to respond quickly and decisively, if they want to win.
In fact, Football is very much a martial training, and in its earliest days was often forbidden on college campuses (where it began) for being too violent. The Ivy League schools that popularized the sport intended for the activity to toughen these young men up, so that they would be prepared for war. It was not simply a hobby, but a real-life training exercise for warriors. They were building warriors of the gridiron.
Of course, using such techniques has been long standing tradition amongst Men of the West. Consider Scottish Highlander games, where stone throwing, Caber tossing, and the like were used to keep the men in fighting shape, especially during times when weapons were outlawed. Go watch the early scenes of Mel Gibson’s Braveheart for an example.
Not only is Football an important social activity, and not only does it train young men to be prepared psychologically for battle, it also helps to keep them physically fit. The young men must train relentlessly. Most small towns have weight-training programs that start in elementary school, so that the boys are ready to play football, when they are old enough.  They engage in both aerobic and anaerobic exercise in order to be fit.
Bread and circus? Give me a break. Football prepares Men of the West to propagate, defend, and enhance the culture. It is not only good, it is indispensable. If you say otherwise, you are wrong, and most likely not a true Man of the West.

First look at the Springfield XD-S