Sir Roger Scruton is a rare intellectual in these benighted and “interesting”-by-Chinese-fortune-cookie-definition times. We’ve mentioned him before, and you really should know a little bit about him.
What makes him rare is he has employed his considerable intellectual prowess and education in the service of classical beauty and order. 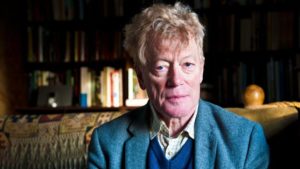 In this article, he turns an eye on a popular leftist thinker, Slavoj Zizek, and finds, not any sort of rigorous foundations, but:
“There has, however, been one important change. A new kind of leftist thinker has emerged—one who clothes his revolutionary zeal in a layer of irony, half-dismissing his own impractical idealism as though speaking through the face paint of a clown.”
But what of it?
“It is proof of the Yugoslav regime’s leniency that Zizek was able to spend time in Paris during the early 1980s. There, he came across the psychoanalyst Jacques-Alain Miller, whose seminar he attended and who also became Zizek’s analyst. Miller is the son-in-law of Jacques Lacan, the unscrupulous power-maniac whom Raymond Tallis has described as ‘the shrink from Hell,’ and it is an unfortunate price to pay for the endeavor to understand Zizek that you have to engage with Lacan, too.”
Lacan, roughly, is a bastard child of Freud, Jung, and Pol Pot, with none of the charm or wit.
“Lacan’s collected Écrits, published in 1966, were one of the sources drawn upon by the student revolutionaries in May 1968. Thirty-four volumes of his seminars followed, published by his disciples and subsequently translated into English, or at least into a language that resembles English as closely as the original resembles French. The influence of these seminars is one of the deep mysteries of modern intellectual life. Their garbled regurgitation of theories that Lacan neither explored nor understood is, for sheer intellectual effrontery, without parallel in recent literature. Unexplained technicalities, excerpted from set theory, particle physics, linguistics, topology, and whatever else might seem to confer power on the wizard who conjures with them, are used to prove such spectacular theorems as that the erectile penis in bourgeois conditions is equal to the square root of minus one or that you do not (until worked on by Lacan) ‘exsist.'”
“The great and subtle argument of Hegel’s Phenomenology of Spirit, to the effect that we attain self-consciousness and freedom through the recognition of the Other, has been recycled again and again by those who attended Kojève’s lectures. You find it in Jean-Paul Sartre, Emmanuel Levinas, and Georges Bataille. And you find it, horribly garbled, in Lacan.”
And what fruits does a student of Lacan produce?
“Zizek’s defense of terror and violence, his call for a new Party organized on Leninist principles, his celebration of Mao’s Cultural Revolution, the countless deaths notwithstanding and, indeed, lauded as part of the meaning of a politics of action—all this might have served to discredit Zizek among more moderate left-wing readers, were it not for the fact that it is never possible to be sure that he is serious.”
Sir Scruton continues to verbally beat both Lacan and Zizek like two rented redheaded stepchildren mules for the entirety of the article. He does what the British do best: very politely, he shivs them. And, without changing his demeanor, he shivs them again. Then curbstomps them. He doesn’t rebut them as much as leave still twitching corpses.
But don’t think this will matter to a devotee. After all:
“Zizek windbaggery serves one purpose: to turn attention away from the actual world, from real people, and from ordinary moral and political reasoning. It exists to promote a single and absolute cause, the cause that admits of no criticism and no compromise and that offers redemption to all who espouse it. And what is that cause? The answer is there on every page of Zizek’s writings: Nothing.”
It’s nothing at the bottom and nothing supports the edifice of revolutionary thought. This is the modern left, a lost mob decrying the solidarity of reality and God for the ephemeral pipe-dreams of, well, nothing, as long as it’s perpetual destruction.
They build on sand and call it granite. Worse, they look to the edifices that have weathered storm after storm and claim they exist only as an insult to True Equality, built on top of, not bedrock, but on the bones of the underprivileged and marginalized. Such claims require proof and such proof always consists of the one thing that is truly equal: Nothing.

Sermon: The Astounding Conversion Of Paul

"The Song of Seven Cities" by Rudyard Kipling