What do you call a charity that collects hundreds of millions of dollars but only gives 3% of the money to it’s recipients? Is that even a charity? Would you donate? What if I told you this charity collected nearly $179 million in revenue, had $354 million in assets, yet gave out a paltry $5.1 million to its beneficiaries. The salaries were nearly $35 million and other expenses were $50 million.
Would you believe the numbers? Obviously, nobody is going to lie and say they gave 5 million to charity and had $50 million in expenses when they really gave 50 million and had $5 million in expenses. This charity smells. I cannot believe there isn’t significant fraud and malfeasance in that $50 million of expenses. There is listed near $8 million for travel and over $12 million for conferences and meetings.
If you were going to donate millions of dollars to charity, wouldn’t you check out who you are giving it to? If you checked it out and saw these kinds of numbers would you still donate? I wouldn’t, and I bet you wouldn’t, yet someone still did, to the tune of $179 million dollars. What were these people hoping to do with that money? It certainly was not going to benefit the needy.
This charity obviously does not exist to benefit who it claims to benefits. Are they doing anything illegal? Well, who knows. The FBI is investigating this charity and has been for years. Nothing has come of it, however.
By now you have probably figured out that I’m talking about the Clinton Foundation. If you would like to look at the information yourself, here is a link the the financial filing I am referencing.
You have heard of the Pay for Play schemes where Hillary gave access to the Secretary of State office for large donors.  While Hillary was Secretary of State, Bill Clinton racked up 11 speaking fees larger than $500,000.


I know people are sick of hearing about the Clintons, but until they are in prison where they obviously belong, we must stay vigilant. Hillary could run again. Chelsea will likely run. These people do not belong in authority. This is one example of many where they abuse our system for personal gain. 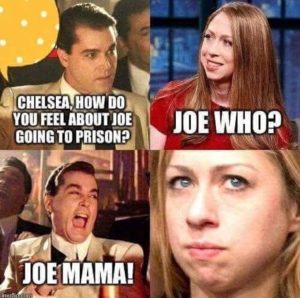