To borrow from Matt Taibbi, the NCAA is a great vampire squid wrapped around the face of humanity, relentlessly jamming its blood funnel into anything that smells like money. It is one of the few organizations whose greed and dishonesty horrify even Goldman Sachs and The First Bank of Evil (formerly Lehman Brothers). It is a singularly useless institution. Not only is it an incompetent and corrupt middleman whose sole reason for existing is to dole out the proceeds from the division I men’s basketball tournament, it is so incompetent and so corrupt that it actually contributes negative value to its business partners. To borrow from Cato the Elder, the NCAA delenda est. 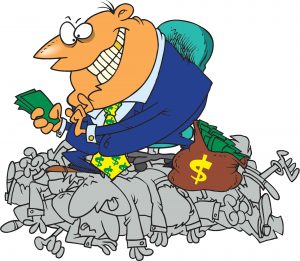 The NCAA is a nonprofit in name only. It has revenues of almost a billion, assets of seven hundred million, and pays its president, the loathsome Mark Emmert, two million. Because the NCAA is a nonprofit, none of that money is taxed. The college student working at the campus dining hall for minimum wage pays a higher tax rate than the NCAA. The NCAA claims that most of its revenue is distributed to its member schools. If the NCAA is merely a mechanism for disbursing TV revenue to athletic departments, I’m sure any number of financial institutions could do that job for them, and probably cheaper. Even Goldman Sachs.
The NCAA serves five primary purposes: to prevent college athletes in revenue sports from getting paid for their labor, to keep those athletes from enjoying the labor protections offered by modern employment law, to terrorize athletic departments with sanctions, scholarship cuts, postseason bans, and numerous lesser forms of petty and vindictive harassment, to bully conservative municipal and state governments that defend the first amendment rights of religious institutions and religious citizens, and to serve as a jobs program for liberal academics who turned to extortion and blackmail because they couldn’t even hold down a position at Trump University or ITT Tech.
The NCAA is the premier example of a converged institution that has inserted itself at the nexus of sports, education, and business simply to leech off the economically productive and use the revenue provided by those producers to advance a liberal agenda that will ultimately lead to the economic ruin of everyone that the NCAA has attached its tentacles to.

Why We Have Law

The Inchoate Stance on Terrorism