Editor’s Note: We try to share good resources with you, and this looks like a good one. The following excerpt comes from chapter 1 on education in Dr. Joel McDurmon’s Restoring America: One County at a Time. 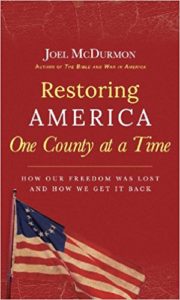 It’s clear that during the founding of America from the Pilgrims all the way up until the middle of the nineteenth century, education was a private affair. In fact, as late as 1860, throughout all the states, there were only about 300 public schools. At this time there were over 6,000 private institutions, but the vast majority of educational “institutions” were at home.
Yet, though education was a thoroughly private affair at the time, masses of children did not fall through the cracks. In fact, literacy was extremely high even in rural western areas, comparable to educated Britain at the time and close even, one could argue, to the U.S. today.
For example, roughly 48% of rural Britons could read at the time, compared to roughly 70% in rural America. Urban Britain was 74% literate, whereas urban America was nearly 100% (based on signatures on deeds, wills, militia rolls, voting registers). Far western, rural Connecticut (e.g., the town of Kent) saw nearly 100% literacy; they took private education so seriously that the locals chartered a school even before the church, and the ministers taught at the school—and it was private.
In rural South Carolina, like in most places, education was also carried out mainly by local pastors. Literacy there was 80% in general, and even 90% among the German population.
Cremin concludes, “[T]hese rates are extraordinary, and stand as eloquent testimony to the power the tradition of learning had acquired in the minds of provincial Americans,” and he notes that this was driven purely by churches and households.
Cremin was a liberal and a progressive, so he had no particular fondness for America’s Christian history, and yet, while writing his definitive four-volume history, he was faced with and was compelled to transmit these clear facts:
1. The Bible was “the single most important cultural influence in the lives of Anglo-Americans.”1 It thus formed the core of American literary and moral education.
2. The household or family was “the principal unit of social organization,” and “the most important agency of popular education.” “The family undertook the training of children ‘in some honest calling, labor or employment.’ “
3. In cases where the family was unable to advance education any further in a calling or trade, businesses or apprenticeships would provide a “direct example” and “immediate participation” in a trade through which a young person could learn a trade, find employment, and contribute to society.
4. Entrance into apprenticeship programs was free and easy. Unlike in Europe or Britain at the time, there was high demand for skilled laborers, an absence of guilds that monopolized and controlled labor, no informers, no legal obstacles, no Statute of Artificers, no fees, and no property restrictions.2
5. Additionally, there were private night schools for working adults to improve their English and vocational skills.