Editor’s Note; This was originally published at Orthodox Canada a couple of years ago. Today, September 14, is the Orthodox Feast Day of the Elevation of the Cross, and since Christianity is such an important aspect of Western Civilization, and the Cross is the most potent symbol of Christianity, we share this with you.
Elevation (Vozdvyzhenye) means to raise up. The first time the blessed clergy raised the cross, was after the blessing of the new temple in honour of Christ’s Resurrection, at that place where the tomb was, from which Christ resurrected. This was done so that most of the pilgrims, whom had gathered in Jerusalem for the solemn feast, the first after the persecutions of Christians, could see and venerate the life-giving Cross, as well as confirm that indeed the Cross was that of Christ. 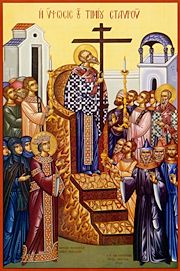 Why do we today raise up the Cross, on which, like on the sacrificial table the release from sin and the saving of humanity was accomplished? Not only in remembrance of this solemn event. We raise up the cross as a sign by which those whom have lost their way, are tired and weary, could again find the path. Today, the cross which is raised up high, becomes a saving spiritual lighthouse for unbelievers ans those who believe wrongly, which helps them come to God’s Church. With help of the cross Christ wishes to save all the lost sinners.
In the army, when soldiers are advancing to attack, the national flag is held high preceding them. That flag is carried by a particular soldier in order to raise the spirits of the warriors, to make them braver, so that they would fight more aggressively. The flag showed them that they were not alone, that the entire homeland and people for whom they were givng their lives for, were behind them. So must each christian — a spiritual warrior for Christ, who is at war with the devil, with the help of the cross bind him, defeat evil with good. The cross is for us a sign of strength, rather than weakeness; the cross is always followed by victory and joy.
The cross is like a shield, which protects us from the devil’s arrows, from storm and rain, like and umbrella when raised. It is very important for a soldier to have protection from the enemy. God defeats the devil using the cross; the devil fears the terrifying weapon being a symbol of love and life.
The cross is, for us faithful, like a ladder by which we can rise to any spiritual hight, closer to God. Our path towards Heaven, towards salvation lies also through the cross! Saint Mary of Egypt, whom lived in the 5th century, also began her life of repentance and closeness to God, with the veneration of Christ’s Cross in Jerusalem at the feast of Elevation. Today also, the cross is raised up high in church, so that more people can see it, bow to it, and save themselves. The raising of the cross is done on four sides to signify that the Lord through His Cross atoned for the whole world — east, west, north, and south; then once more to the east as a sign that Christ atoned for man, who has five senses by which he constantly sins. A day of fasting has been established on this feast as a sign that ‘true honouring’ of Christ’s Cross consits of the mortification of passions of the flesh.
The cross bares witness not only to God’s great love, but also His great humility. Today, in the Gospel reading we heard, how apostle John tells us about the voluntary death of our Saviour. The Lord lowered Himself, humbled Himself to a shameful death on the cross. He awaits from us humility and obedience to Him. When man’s heart is filled with pride, when a man wishes Alone to be happy in his life, when man relies only on himself and is prideful, when he forgets about God and refuses to carry his cross; then all in our world begins to crumble, starting with the Old Testament temple in Jerusalem (man built by God’s will) where people sincerely worshipped God. So also dissapeared the Great Roman (Byzantine) Empire in the 15th century; and one hundred years ago the Russian government, built with great difficulty, headed by the ‘Tzar’. Likewise when love is lost, then family falls apart.
As we bow to Christ’s Cross, may He help us lift His Cross as high as possible in our lives, so that through this elevation of the Cross the maximum amount of people may come closer to the Cross to venerate it, and honour the One, who saved us by being on it! Amen!

Blast From The Past: Spokojnoj Nochi General

Hymn: My Jesus, I Love Thee