Of all the moves GQ could make, this is one of the worst.

This is what full-blown Cultural Marxist Doublethink looks like. 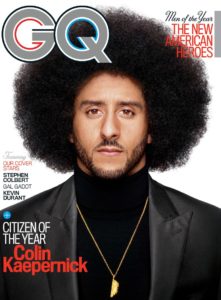 Kaepernick applied the right amount of pressure on an already weakened institution. The NFL has been papering over the fact that far too many of their players are thugs with rap sheets. They already ceded any sort of moral stance they might have once held.

People watched the NFL to be entertained. Many fans treated their favorite team and players like many parents treat their school district — sure, they suck, but ours isn’t like the others.

As soon as Kaepernick threw his hissy fit and dragged social justice politics into the forefront, every player there folded like cheap suits and dropped to their knees. They don’t have backbones. For such physically tough guys, they are nothing but paper dolls, easily led.

This social justice rot alienates fans. The NFL is hurting, how much remains to be seen, but the forecasting is looking grim. I know more than just a few guys who up and canceled their Sunday Ticket with DirecTV. At the start, DirecTV tried to get them to keep the package. Within two weeks, DirecTV was canceling the Sunday Ticket on demand, no questions asked. Massive companies don’t turn call center support scripts on a dime unless the command came from high up.

What once was common ground for a lot of guys has become yet another battlefield for politics.

What once was entertainment has become another venue for the screeching racists to try to guilt white America, again, for the criminal behavior of a subset of Blacks.

If GQ was so concerned about the state of the world, they wouldn’t be honoring this weasel. No, they are virtue signalling because they are fellow termites, gnawing away at our society. Cultural Marxism is one of endless criticism and joyless nihilism that turns everything in a fetid swamp of identity politics and the perpetually aggrieved. They’ve doubled down on a vessel so lacking of anything of value the all he can do is parrot racism in some sort of primitive ritual designed to grant more gimmedats.

Kaepernick isn’t a citizen. He’s a Marxist tool, creating division and chaos. When more than ever Americans needs to find common ground, he’s turned football into another political, er, football, and eroded more of the veneer of civility holding us together.

Instead of being honored, he should be ostracized and spurned. Mocked, when thought of at all. Forgotten as soon as possible and forever.