Antifa has one of two paths: they can fade away to nothing or escalate their violence.

Communists are delusional; anyone that embraces the lie has to keep doubling down or he faces the truth. There are as many reasons why people avoid the truth as there are people.

There are powers behind the Antifa movement, people bent on destroying the pillars of America, especially white Christianity and masculinity. They don’t care about Antifa’s goals anymore than a chess player cares about what the pieces on the board are thinking. They will use Antifa with no thought of the people behind the signs and masks. They will use them to destroy the West.

And if you are in the way, they will use them to hurt, maim, or kill you.

As long as the various levels of government are infected with the diseased philosophies of Progressivism, do not look to them to save the body politic. They will be, at best, neutrals in this war, at worst, enemy accomplices. 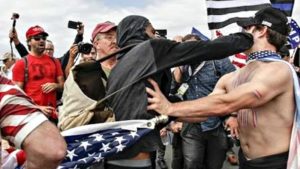 The Antifa soyboys will be equipping themselves with weapons or they will be replaced with those that will carry something to harm, to kill anyone they see as the enemy. Just as their masters don’t care about them, they will not care about you and yours. Your pain, suffering, and death gives them a flash of distorted human emotions, and they will feed off that. Hollowed souls, always seeking to be satiated and never finding rest.

If you engage with them in the future, take extra precautions. Make sure you have men you trust at your back. Record everything, and I mean everything. Have two exit plans, at the least. Wear protective clothing. They will be using whatever liquids they can smuggle into the war zone. Make sure you have thick outer layers. I wouldn’t be surprised if they start using needles with something nasty inside.

If you have to hit them, end them.

We’ll have to flense away the chaff to get to their core, then break that core so hard and mercilessly their backers will need to find new patsies.

We are the Men of the West. For the sake of our families, our country, and our God, we will not break. So we need to break them, good and hard, before they carry this further.

Video: The Spread of Cultural Marxism and Its Endgame