The 55th chapter of the Psalms was composed by King David as he was running away from his rebellious son Avshalom.  At that point, David was also notified that Achitofel, who had been David’s closest friend and adviser, had betrayed David and joined with Avshalom in his rebellion (cf. II Samuel 15).  Both Doeg and Achitofel earned the appellation of “men of bloodshed and deceit,” about whom the verse says: They shall not live out half their days.
Jewish tradition informs us that neither Doeg nor Achitofel lived to the age of 35 years, less than half the life span of an average person, which is seventy years (Sanhedrin 106b).  After being betrayed once again, David teaches us that when one is hounded, there is only one solution: prayer. 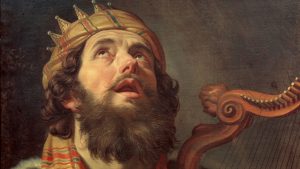 Cast upon God your burden and He will sustain you (v. 23).  Though the basic meaning of this verse is that it refers to the burden of one’s livelihood, it can also refer to all of life’s troubles and burdens.  Regardless of how hopeless the situation may seem, when one throws his burden upon the shoulders of the Almighty, he can be assured that his prayers will be answered.  The overwhelming weight is lifted, as one is freed from worry and anxiety.
In verse 18, though David is clearly restless and greatly agitated, the very fact that King David could still muster the strength and proper mindset for prayer, despite the inner turmoil he was experiencing, was a clear sign to David that God had already heard his voice and supplication.  David recognizes and expresses that every peaceful, happy day that he ever experienced had also been a gift of God’s omnipotence and goodness, since it was only He Who had always delivered him from impending peril.
It was God Who raised David far beyond any such danger even in those days when the masses did not stand arrayed against him as they did presently.  Even in those better times, when he had hosts of supporters among his people, even the most intimate support of his closest friend, it was never to the masses and hosts of supporters, but to G-d alone that David owed his peace and happiness.
Occasionally we forget David’s timely message of hope.  However, God is certain to remind us, and sometimes the most unlikely of messengers are the ones who deliver the encouragement.  In this Psalm David teaches us when and how to ask for God’s help and support (v. 18): “Evening, morning, and noon, I supplicate and moan; and He has heard my voice.”
We constantly face challenges in our lives.  Some we feel equipped to handle; others seem ridiculously daunting and unfair.  In all instances, though, we are advised, “Throw it all onto God’s lap, pray and cry out to Him with heartfelt concentration.”  He knows you can’t do it on your own.  No one can.

Humble yourselves, therefore, under God’s mighty hand, that he may lift you up in due time.  Cast all your anxiety on him because he cares for you.  (cf. I Peter 5:6-7)

Is This a Simulation?