Editor’s Note: This is the second installment of Erika Andersen’s article on enhancing the marital relationship. You can see part 1  here.

“Touch him. All the time. It’s important to a man that his wife touch him.”
That was the advice a male friend gave me regarding my husband. My friend is a passionate Italian, so he probably knows a thing or two about love.

I took his advice. I started touching my husband on his arm as I passed him in the kitchen. I put my arms around his neck and kissed him, just because. I caressed his backside playfully when no one was looking. I gave him back massages while we watched TV at night. It was surprising how much he seemed to need this. It was even more surprising how much I needed it. Touch communicates love, affection, tenderness, and desire all at once, and in a way that is far more direct than words. The more I touched my husband, the more feminine and desirable I felt, and the more I desired him.

A woman’s capacity for sexual loving has a lot to do with how feminine she feels; the contrast between a man’s masculinity and a woman’s femininity is what generates sexual excitement. If you want to feel desire for your husband, dial up that contrast to maximum. The best way to do that is to surrender unnecessary control over to your husband. And you want to do that with a good attitude. It’s surprisingly easy. 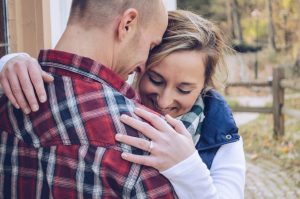 A while back, I decided to test something out. We women seem to have gotten the idea that the world revolves only through sheer force of our will, usually exerted through never ending “helpful remarks,” aka criticisms. I decided to conduct an experiment to see what would happen if I refrained from making criticisms to my husband for a week. And by refrain, I mean entirely, completely, not even one criticism, no matter what my husband did. I made up my mind that even if he decided to start defrauding banks for a hobby or take a job as a hit man for the mob, I would say nothing critical. For just one week.

A funny thing happened once I made that commitment: I immediately felt release. For once in my life, I didn’t have to worry about what things warranted criticism and what didn’t. Because, for this one week, nothing did. I was free to say nothing. It felt great.

And it turned out to be easier than I thought. For one thing, my husband didn’t take up defrauding banks in his spare time or killing people for a living just because I stopped picking at him. He actually did very little that warranted criticism. And as the days went by, we began to relax and have fun. I rediscovered how much I liked my husband. He seemed to rediscover how much he liked me. I was free to use that all that time and energy I would’ve spent analyzing and criticizing his decisions to take care of myself. I felt soft, I felt feminine, I felt good about myself. I felt his strength as he navigated daily life for us. As a result, my desire for my husband increased significantly.

This isn’t to say you can’t make your needs and wishes known to your husband. You can and you should. But it is best done in a non-critical way. Men—even the super-macho ones—are like puppies: you’ll get much more of what you want from them through encouragement and praise than through criticizing.

We women are our own worst enemies. We often voluntarily deprive ourselves of the joy, serenity, and excitement that God wants us to experience in our marriages. Even worse, we blame our husbands when we don’t experience those things.

Wives, I’m here to tell you that you are the ones who can turn things around. Don’t settle for barren sex lives. If you’ve lost that loving feeling, you can change it. You can feel hot for your husbands again.

It practically goes without saying, but don’t forget to make your husbands sandwiches—lettuce-wrapped, if they’re also going low-carb.

People of the West can't afford to be naive. Freedom is too hard to gain and