We are asked each day to surrender our independence in the name of convenience. In most cases we do so gladly. We make the trade without a thought. It sounds like such a good deal, after all.
Consider…
You don’t want the responsibility of educating your own children, and the government offers to do so for free. Sounds like a great deal, doesn’t it? But set aside the issue of indoctrination and the worry of inferior education, and just look at the deal you’re making.
A child in school is a ball and chain. Oh, you may have 8 weeks of vacation a year, but you don’t get to take them the way you want to because your kid has to be in school. You’re tied down. 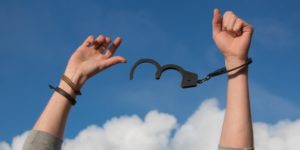 Compare that to a family that takes the responsibility themselves. They come and go as they please. For example, back in 2008, we spent 10 days each in Destin/Navarre, Disney, North Georgia, and Pennsylvania. That was more than a week in each of those months that my kids would’ve missed school. It would’ve ended badly. They would’ve been classified as “behind,” regardless of the fact that they no doubt would still be far ahead. It’s just something families don’t do.
Hell, even work itself is a terrible ball and chain. You’re trading the responsibility of earning your own money for the security of a paycheck. An illusion if ever there was one. A man that works for himself, or better still, a man that employs others to work for him, is a free man.
And lastly, I’ll offer one other crippling cuff: the very possessions we cherish.
You can’t just get up and move can you? You can’t just make up your mind to leave and hop on a plane to Paradise, right? You have a house to sell. What would you do with all that furniture? What about all your stuff?
You see where I’m going with this? When we make a decision, we should be a little more conscious of the consequences. I’m not saying that you shouldn’t take a good job because your independence is too valuable. But be aware of your options.
And what of security? That’s the big one right? We’re terrified of crime or terrorism, and thus we frantically look for another set of handcuffs to jam our arms into, as if it will do any good. The truth is that security from crime is something that is beyond the scope of a government to provide to an individual or even a family. That’s a cold, hard fact. Cops are historians. 911 operators are there to tell the cops where to go take pictures of the bodies.
In the case of security, individually, you can choose to take the responsibility, or you can choose to ignore the fact that you’re a statistic in waiting.
But as a whole, as a population, the threat is just as great. We continue to leap from the frying pan to the fire, seeking salvation where there is only doom.
If your house is on fire, you cannot put it out with dynamite. Nor can you save your cherished freedoms by surrendering them to the government.