Not to be a pain, or obtuse, but where in the Bible does it say that homosexuality is against God’s will? Isn’t it in Leviticus? And isn’t true that Jesus never condemns gay marriage?

Short answer: yes
Long answer: while homosexual conduct is condemned in the Mosaic Law (c.f. Le 20:13) and in the NT (c.f. Romans 1:26-7), that’s not why I conclude God stands in opposition to homosexuality, and especially the parody known as gay marriage. Mosaic Law makes several exceptions (e.g. divorce) due to human weakness and so is not always a good indication of Christian teaching.
However, before I go any further I need to clarify that what follows applies only to homosexual acts and relationships, not to feelings or attractions. In other words, it’s about deeds, not feelings or temptations. We can’t help how we are tempted, only what we do about it.
The main reason we don’t find much in the Bible concerning homosexuality is because it was never much of an issue in the Ancient Near East. It doubtless existed (thus the law in Leviticus) but it didn’t even have a name, just a description.
As with many things biblical, we have a model or target, and we have everything else. Jesus talks a lot about the model, but shows very little interest in various schemes that don’t conform to it.  So let’s take a look his teaching and draw out the principles:

“…from the beginning of the creation God made them male and female…”
— Matt 19:4

Simple enough: begin with two separate sexes who were designed that way by God, on purpose and for a reason explained below.

“…For this cause shall a man leave his father and mother, and cleave to his wife; And they shall be one flesh…”
— Matt 19:5 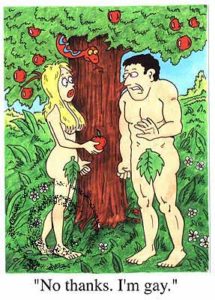 Two separate sexes, joined together, and together become something different, something more than they were before. This is the essence of Jesus’ teaching on marriage, because this joining of two incomplete sexual creatures into a single being was the very purpose of the creation of two distinct and differently-bodied sexes.
Into their relationship was designed an emotional and spiritual bond. It is the physical act of sex (“Adam knew his wife”*) that is both the cause and the conduit of this bond. To create the bond, God created the parts used for bonding to be different and interlocking. It is both symbolic and very, very practical.

But this bond is not just a natural cause/effect. Jesus says that married couples are joined by God. It must be a pretty important institution to gain his blessing in such a specific way.
So what can we draw from this?

If we begin with Jesus’ creation-based principle, we can explain why Paul says what he says in Romans and why Moses says what he says in Leviticus. It’s not simply a matter of this command or that – as if this act we call sex is just a blank slate that needs rules applied to it. It’s a matter of human beings being designed to interact in a certain way by their Creator.
When you try to re-create that same model using parts as they were not designed by God to work, you have a counterfeit. That’s why whatever gay marriage is, it ain’t marriage. Since sex is designed for marriage (see Jesus’ teaching on adultery**), if sex is part of a relationship that is not marriage, it is outside God’s will and therefore a sin. Ergo, homosexual conduct is a sin, even when blessed by a “minister” while standing in a “church”.
In missing the model or target of sexual conduct proclaimed by Jesus, a physical homosexual relationship is no different than an adulterous one, an incestuous one, or a bestial one, and the homosexual is no less (and no more) a sinner than a guy who cheats on his wife on business trips.
The sinfulness of the act is not inherent in prudish reactions to the very thought of it. Its sinfulness is certainly not wrapped up in votes or marches or societal acceptance. The sinfulness of the act lies solely in the fact that God created us to do A and we do B, C, and D, instead. And the farther we get from God, the farther down the alphabet we go. That’s Paul’s point in Romans 1. Liberal denominations are illustrating it for us in real-time.
Now, let us turn it around: is there in the Bible a single occasion where a same-sex sexually-engaged couple is blessed, accepted, or praised? If there is not, then we’d better be careful before we write God’s name on something he has withheld it from.
* Yeah, I realize there is a sequence error in the picture. Just work with me here, people.
** As opposed to that of CNN.

7 Self Defense Techniques When You Don’t Have Your Gun