It is not difficult to see how any society that practices those things will over time grow rich.  The society that produces more than it consumes will own more at the end of the day, every day. The one that consumes more than it produces grows ever poorer. European and American prosperity is the result of neither “White privilege” nor colonial exploitation, but math.  It’s the predictable and experiential result of capital accumulation and production and longer time preferences. 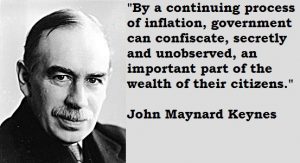 But somewhere in the last century, we gave up on the idea of saving and frugality, and even productive work.  It was right at the time where we started measuring activity. We call that measurement GDP, gross domestic product, and it is essentially the sum of our collectively-produced goods and services.*
Unfortunately, GDP under the Keynesians has also become the ideological end-all-and-be-all of our economy.  More GDP is always considered a good, and any strategy to increase spending is counted a noble endeavor.  It’s good to pay one man to dig a hole and another to fill it. It’s a plus to build bridges to nowhere. You can do $50 billion in damage to homes and businesses, and the Keynesians will cheer that the economy is thereby helped. It’s madness.
Since Keynes and especially neo-Keynesians fell in love with the idea of measuring activity no matter its ultimate worth, we have finally come to the point where no eyebrows are raised when a Keynesian says that the solution to the economy’s current funk** involves stealing the wealth of the citizenry if they will not part with it voluntarily:

instead of making [negative interest rates] punitive on the banks, …make them punitive to savers… Cash should be charged interest — put the micro chip in large denomination notes/tax cash withdrawals…encourage spending not saving.

Encourage spending, not saving.  There, in four words, is the pulling of one of the lynchpins of Western civilization.  It is the epitome of short-term thinking***.
It is also the path to poverty. Our entire economy, which over the past century has been transmogrified into an orgy of profligacy and living-in-the-now, has been a lot of fun. But we are now unmaking what made us into us. And by the sounds of the cheering, we are loving every minute of it.
* There are a couple of ways of measuring GDP, but it’s basically C+I+G+(Ex-Im), or Consumption + Investment + Government + (Exports – Imports).
** besides destroying the currency, natch.
*** There is no one with a shorter time preference than a Keynesian economist.

The Story of Henry Hudson

A Legend of Bregenz