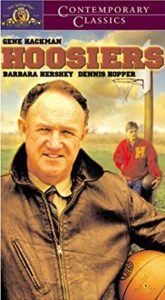 My sons and I recently watched the 1986 movie Hoosiers. For some reason, they had never seen it, and as my oldest son is a big basketball fan, I figured he ought to watch it at least once. Of course, I watched it when it came out in the theaters, and have viewed it several times over the years. It is a nice “David vs. Goliath” story, joined with a nice story of redemption. As the credits rolled this time, I realized that there are several good life lessons we can learn from the movie.
Now, I realize this movie is 32 years old, but in case you have not yet seen it, be warned, Spoilers ahead.
First of all, we learn about hard work. A new coach is hired in a small, rural Indiana community, consumed with basketball fever. While the team had previously focused on shooting the ball, Normal Dale has his team focus on fundamentals: dribbling, passing, and being physically fit. They work hard to develop those skills, as the coach knows that without them, his team can never truly compete. Even when the nosy townspeople try to interfere, he sticks to his guns, and trains his team his way. He tells them that they will be the best conditioned team on the court, and that approach eventually serves them well, especially since they start with only 6 players (and one of them was really the equipment manager). They do end up with 8 players by the end.
Second, we learn about discipline. Coach Dale expects his team to follow his rules. When one of his players begins shooting baskets in a game, after being told to pass, Dale benches him, replacing him with the short, untalented equipment manager. When another player fouls out, leaving only four players in the game, Dale refuses to let the benched player back on the court, saying that his team will play with four men only. While this disgusts the townspeople, it actually has an impact on a former player who had chosen not to play for a new coach (he had made that determination before Coach Dale was hired), and the young man, the best player in town, decides to come back and play. So not only is the unit formed into a disciplined team, but that discipline draws others to the coach’s cause.
Third, we learn that everyone has a role to play. The small equipment manager is not a good basketball player. At one point, he dribbles the 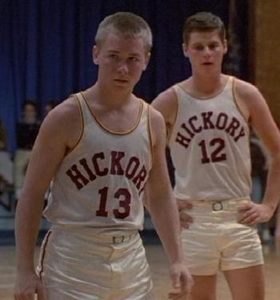 ball off his leg and out of bounds, but in the state semifinals game, he is forced to play, due to fouls and injuries of other players. He is fouled and misses his shot badly. It is a tight game, with their team down by one point, and he is fouled again. His teammates come to him before he shoots and tell him, “you got this.” He sinks both free throws, and the team wins the game, heading toward the state finals. There comes a time when people have to step up and do their job, even if it is not the ideal situation.
Fourth, we learn that some things are just unpredictable. This movie is actually based on a true story. It is not an exact representation of history, but it is based on a 1954 Indiana team that won the state championship, though a very small school. At that time, the state did not break down the schools into any sort of divisions, so small, rural schools would compete with large, urban ones. While there is no reason that a tiny town should be able to produce a team that could whip schools many times larger, it happened. You just never know.
Fifth, we learn that you need to let your best people do their jobs. We live in a world that likes to hamstring folks, all in the name of equality. But we need to put our most talented people to work, doing what they do best. In the final game, with time for one shot, Coach Dale decides that his best player will be guarded closely, so he orders the team to have another player take the final shot. The best player looks at the coach and simply states, “I will make the shot.” Dale agrees, knowing it is a good idea to put the ball in his best player’s hands. He makes the shot. By the way, that shot is based on true history. It happened, and in the exact spot where the movie shot took place. They filmed it in the same stadium.
Sixth, and most importantly, this movie is about redemption. Honestly, there are several examples in the movie, some major and some minor. We have the aforementioned free throws by the equipment manager, sending the team to the state finals, after he had been ridiculed the whole movie. We have a smart aleck player who quits the team after butting heads with the coach, but is allowed back after apologizing. But there are two events in the movie that really highlight this theme. 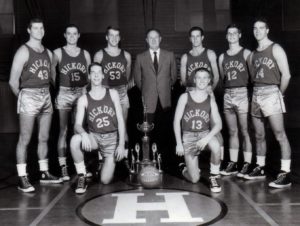 The hiring of Norman Dale itself is a chance at redemption. It turns out that Coach Dale had been a very successful college coach, winning a national championship, but he threw it all away when he lost his temper and punched one of his players. He was banned from ever coaching college again. He spent ten years in the Navy, before an old friend, who was the principal of the small High School, offered him the high school job. Of course, the townspeople do not know this background (remember, no internet in the 1950s), but this was Dale’s last chance. If he failed here, it would be the end of the line. That makes it even more admirable that he sticks to his guns, even when the townspeople want him fired. But by doing so, he led his team to the championship.
And yet that is not the greatest example of redemption. The town drunk, Shooter, had been a former star for the team, but had missed a critical game-winning shot in a playoff game twenty years before. He had never gotten over that, and was estranged from his family, due to his alcoholism. His son is one of the players on the team, and at first shows much disdain for his father. Coach Dale, knowing the power of redemption, tells Shooter that he would like him to be his assistant coach, but only if he remains sober. For awhile, Shooter succeeds, though he shows symptoms of withdrawal. At one point, when Dale is thrown out of a game, Shooter has to finish the game as coach and the team pulls out a win under his leadership (and has one of the lines I remembered after not seeing it for many years, “we’re gonna run the old picket fence”). Eventually, Shooter succumbs to his addiction, but Dale and his son find him and have him committed to a hospital, to dry out. His son comes to visit him and says he is proud of him and loves him. We see a town drunk given the chance to redeem himself in the eyes of the town, and to rebuild his relationship with his son.
I am sure there are many other lessons we could learn, but these are a good place to start. I encourage you when watching these old movies, to notice the community that exists in these towns and neighborhoods. People draw together, sometimes fight, but do work toward common goals. We can learn a lot watching old movies (or reading good books).

Hymn: Have Thine Own Way, Lord