Our previous looks at life lessons from the 37th President, Richard Nixon, have focused on his own thoughts, actions, and words. In this installment, we will look at something his father did during the tumultuous 1956 election, when Nixon faced stiff opposition to remain the Vice Presidential candidate during Eisenhower’s reelection bid.

Nixon had a successful first term as Vice President, but the fact that Eisenhower entrusted Nixon with many of the “hard line” aspects of the executive office – things that had usually been handled by the president himself – had led to a strong anti-Nixon contingency in the Republican Party. Specifically, one of Eisenhower’s advisors, Harold Stassen, was vehemently opposed to keeping Nixon on the ticket, and he schemed and manipulated several other people to force Nixon to step aside. 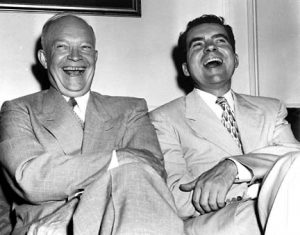 After careful consideration, and bolstered by the fact that large percentages of voters in the 1956 primaries wrote in Nixon’s name for president, the Vice President decided to remain on the ticket, with Eisenhower’s full support. Stassen did not take that well, and he continued to make things difficult for Nixon. Finally, things came to a head, Stassen saw his schemes come to naught, and Nixon was nominated for the VP slot again. In fact, Eisenhower forced Stassen to publicly support Nixon’s nomination. While those final political maneuvers were being completed, Nixon had returned to his hometown, to be at his dying father’s bedside. Francis Anthony Nixon had suffered a ruptured abdominal artery and was in great pain. The future president offered to remain nearby, expecting his father’s demise shortly, but was met with a fiery, “You get back there, Dick, and don’t let that Stassen pull any more last-minute funny business on you.” That afternoon, Nixon was formally renominated by a vote of 1,323 to 1.

The next morning, the doctors indicated that Mr. Nixon was much improved, and were convinced that it was the thrill of seeing his son vindicated that spurred the recovery. Again, the younger Nixon offered to remain with his father, but was chastised. Nixon reports that his dad “practically blew his top.”

So the Vice President and his wife returned to the Republican Convention, held in San Francisco. After those festivities were completed, they returned to Washington, only to be called back to California, as his father had taken a turn for the worse. Nixon relates the event:

The doctor told me that it was only his determination to see me defeat Stassen and be renominated that had kept him alive this long. Now his condition was worsening. He knew that the end was near, so he gave my mother instructions for his funeral and asked to be allowed to die at home rather than in the hospital. He died at 8:25 p.m. on September 4, 1956. (The Memoirs of Richard Nixon, p. 176)

I find Nixon’s memoirs to be very poignant here. There is a strong emotional response to the support that his father provided in a troubling time. Certainly, Mr. Nixon was suffering himself, and would welcome the presence of his son, but he also knew that there was more to life than a momentary comfort. In his dying days, Mr. Nixon recognized that his son played a prominent role in society, and that role was important, not just to their family, but to the entire nation.

Rather than selfishly demand his son’s attention, he encouraged him to think about the big picture, and to win. That is what real men do. When necessary, they withhold their own comforts for the betterment of society. We can learn from Mr. Nixon. Just as he did not choose for his son to enter politics and be elected to national office, so the Men of the West did not choose the cultural fight before us. But fight we will.

As such, we have responsibilities, not only to our families (though we do have those), but to society at large. For those of you who have such men in your families, it behooves you to support them. Do not keep them from the fight, but encourage them to do their duty and to win.

Previous “Lessons From Nixon” articles can be seen here: