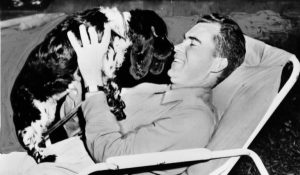 While we tend to mainly remember Nixon as the “failed president” who resigned after Watergate, there was an earlier controversy that threatened to derail his political career, even before it really got started.

After Nixon’s naval service during World War II, he was elected to the House of Representatives in 1946, and became semi-famous, considered an “up and coming” young congressman. This fame was due to his dogged determination to fight communism, primarily in the context of the Alger Hiss case. That will be a topic for another article at some point.

In any event, his sudden rise in importance led to his election to the Senate in 1950, followed by becoming Eisenhower’s choice for a running mate in 1952. So in six short years, Nixon went from being unknown to Vice Presidential candidate. Things appeared to be going well.

Then the bottom fell out. Like most members of congress, Nixon had a private fund, used for covering the expenses of serving in office. While most Americans were not aware of these funds, it is important to note that this was a common method of paying for expenses that salaries and operating funds would not cover. For example, members of congress were given a stipend to cover one trip to their home districts per year. So if a congressman wanted to be present in Washington to do his job, as well as interact with his constituents on a regular basis, he had to pay for those trips out of his own pocket.

To help cover these additional expenses, funds were set up, with the congressman having no control over the money. However, his supporters would use them to pay for flights, trains, and other sundry expenses associated with the office. There was nothing underhanded about it, and the congressmen would receive no salary, etc. from it.

However, Nixon’s political opponents decided to bring this issue up as a swipe at his fitness for office. The story broke and spread like wildfire, threatening not only his place on the ticket with Eisenhower, but his very political career.

Nixon found himself at a crossroads. He was pressured from within his own party to step down. Eisenhower himself, though attempting to appear above the fray, did not directly call for Nixon’s resignation, but certainly hinted that it was his preferred route. Nixon did, in fact, seriously consider stepping aside, but a conversation with his wife, Pat, changed his mind.
She pointed out that if he was forced off the ticket, Eisenhower would lose the election, but more importantly “she also argued strongly that unless [he] fought for [his] honor in the face of such an attack, [he] would mar not only [his] life, but the lives of [their] family.” With this support, Nixon determined to challenge his accusers head on. 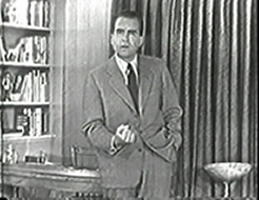 If you know anything about the 1952 election, you know that this resulted in the famous “Checkers Speech” that saved Nixon’s career and actually catapulted him into the public consciousness. In fact, the entire event backfired on his opponents, as he actually increased in popularity.

But before the “Checkers Speech” could be aired, Nixon had to get past Eisenhower’s ambivalent neglect. Eisenhower had basically stepped away from Nixon during the entire ordeal, leaving the younger man to fend for himself. Eisenhower informed Nixon that it was not his place to tell his running mate what to do, but that he would neither publicly support him, nor castigate him. By doing so, he hoped to cajole Nixon into stepping aside.

Rather than allow Eisenhower to take such a cowardly path, Nixon challenged him. The following account is Nixon’s own memories of that conversation:

“’General,’ I told him, ‘I just want you to know that I don’t want you to give any consideration to my personal feelings. I know how difficult this problem is for you.’ I told him that if he thought my staying on the ticket would be harmful, I would get off it and take the heat. But I also told him that there comes a time to stop dawdling, and that once I had done the television program [Checker’s Speech] he had to decide. ‘There comes a time in matters like this when you’ve either got to shit or get off the pot,’ I blurted out. ‘The great trouble here is the indecision,’ I added.
“The language I used startled the men in the room with me, and I can only assume it had a similar effect on Eisenhower who was certainly not used to being talked to in that manner…”

Faced with tremendous pressure from opponents and friends alike, Nixon faced one of the most popular men in the country, and made a stand. He would not be bullied. He was innocent of the charges, and only a direct request from the man at the top would cause him to step aside. He forced Eisenhower to make the choice, rather than offering himself up needlessly. He would be no man’s patsy.

Shortly after the speech aired, Eisenhower appeared before a crowd in Cleveland and proclaimed, “I happen to be one of those people who, when I get into a fight, would rather have a courageous and honest man by my side than a whole boxcar of pussy-footers. I have seen brave men in tough situations. I have never seen anyone come through in better fashion than Senator Nixon did tonight.”

So what do we learn from this account? When attacked by scurrilous lies, stand tall and defend yourself, even if you are alone. Even if your friends and associates desert you, do not give in. Face the bullies and the wishy-washy, and tell them to do their best, because you damn sure will. They can give you their best shot, but you will remain firm. Do not allow others to force you to do their bidding, especially if it is done by them to save face. Make each person accountable for his own actions.

Basically, do what is right. Do not be cowed. You will win in the end. And you might just encourage others to do the same.

A Time For Choosing, by Ronald Reagan

How to sharpen an axe with a file