If the virtue-signaling of the Southern Baptist Convention expressed in its recent resolution to categorically condemn ‘white nationalism’ and the alt-right as a “a growing menace to political order and justice that seeks to reignite social animosities, reverse improvements in race relations, divide our people, and foment hatred, classism, and ethnic cleansing” isn’t an indicator of the danger that convergence with the world poses to Christianity and God’s people, perhaps nothing is. The primary problem facing Christians today is that they are no longer shaping and influencing much of anything. The tail is wagging the dog, has been for some time now, and no one seems to care, let alone notice.

So, what has happened? Quite simply, mainstream Christianity has lost its edge and has fallen into the trap of civility, a trait which has been unceremoniously sanctioned, but enthusiastically extolled as a Christian virtue. Christians are no longer driven by a passion for God’s truth as much as they are by political correctness and the prevailing societal trends of the present hour. In other words, God’s truth and the truth of His Word are no longer central, let alone relevant.
I would suggest that the Church and its adherents have a problem that goes way beyond the so-called ‘separation of Church and State’, a problem which pales in comparison to the real problem: the separation of Church and God. It is also evident that Christianity no longer derives its theology, power, and authority from the Word of God, as much as it does from the culture which it ostensibly claims to be countering. Trying to get the average Christian to recognize this trend, let alone admit to it, is a daunting task, to say the least.
The convergence that the Church has been experiencing over the last several decades has proven successful in reducing the Christian faith to something that is, by and large, private, internal, and unassuming. For the average Christian today, belief is no longer a confession of God’s truth, as much as it simply one belief system among many which contributes to one’s “personal identity.”
After all, hasn’t the culture granted all of us the absolute freedom to believe whatever we want to believe, so long as we are careful to maintain our civility when engaging and interacting with others? Which of course means ensuring that our beliefs do not infringe upon the consciences and behavior of others, especially the most controversial points of what we believe, and most especially those points which are firmly rooted in the Word of God, engraved in stone even.

No, we have been conditioned to be “seeker friendly,” sociable, amiable, sensitive, all in the precious name of Relevance. The failure to be nice is the eighth deadly sin and one of the gravest offenses one can commit today.  It’s the eleventh commandment: Thou shalt not be offensive, neither your man servant nor your maid servant, neither you ox nor your donkey, nor the stranger and the sojourner living within your gates; thou shalt not be offensive, thus sayeth the god of this age.
For most Christians, this convergence may just be one issue among many with which Christianity must contend.  But make no mistake, it is the issue, and it must be addressed before it destroys everything in its wake. What most Christians fail to understand is that this convergence, which seeks to curry favor with the world while compromising the truth and the truth of His Word, is a pervasive disease that is infecting their very souls.

They soon forgot His works; they did not wait for His counsel, but lusted exceedingly in the wilderness, and tested God in the desert. And He gave them their request, but sent leanness (lit. wasting disease) into their soul. (cf. Psalm 106)

Today, we find ourselves in the unenviable position of contending with unreasonable minds that are converged due to a complete and utter lack of interest in the truth – most especially the truth that is expressed in the Word of God, truth which is rarely, if ever, inoffensive. And sadly, we discover convergence where we should least expect to find it: in circles where the light is supposed to be shining in a dark place.
The Church, and all that it is supposed to represent, has become a colossal joke in Western society and is already so converged it is powerless to address the the most salient issues of our time, let alone in a manner that is even moderately effective. The Church is so profoundly confused about its mission and purpose in this world, that if it were to close its doors tomorrow the world would be, if we are being honest, far better off.
Convergence is a term that has been coined, I believe somewhat recently, to describe what happens when an outsider seeks to impose its values upon an established organization in order to co-opt and undermine the established values of the organization and eventually the very organization itself in the name of diversity, equality, or some other noble-sounding platitude. Although it is all too often a common result, convergence is by no means the inevitable result.
In order for convergence to be realized, the organization must first compromise and acquiesce, and the smallest compromise will do. In Biblical terms, convergence is simply the Worldliness of our time being permitted to influence and shape the Church and God’s people, while imposing its philosophies, thought processes, values, and behaviors upon God’s people and its institutions.
What is more, the culture  is quite adept at concealing and repackaging its pernicious values in the affluence, comforts, luxuries and technological wizardry of our day, and do it so adroitly, that even those who name themselves as followers of God fail to recognize and discern the darkness masquerading as light. In short, God’s people are compromised and, what is more, most seem pretty OK with it. All this and Heaven too! Christianity as a civil religion is now a religion of civility that has been rendered toothless and benign. But convergence has a steep price:

For what profit is it to a man if he gains the whole world, and loses his own soul? Or what will a man give in exchange for his soul? (cf. Matthew 16) 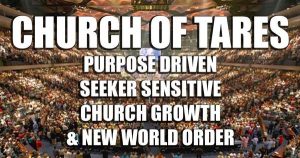 A large part of finding a solution is recognizing and addressing the problem … and what is the problem, exactly?  One theologian put it this way: “God rests too inconsequentially upon the Church. His truth is too distant, his grace is too ordinary, His judgment is too benign, His gospel is too easy, and His Christ is too common.” In other words, God may be believed, but the hard truth is that He is of no real consequence to those who profess belief. There is simply no real fear of God any longer and the prevailing attitude towards His Word would seem to indicate that not too many really believe that God said what He meant and meant what He said.
Convergence with the world always has and always will spell death for God’s people. It will always mean hiding God’s light under a bowl. And left unchecked, it will eventually mean denying the One Who bought us. Although the champions of convergence would like to convince us otherwise, no one, most especially those who claim to belong to Him, can serve two masters and God’s people should know better:

You adulterous people, don’t you know that friendship with the world means enmity against God? Therefore, anyone who chooses to be a friend of the world becomes an enemy of God. (James 4)

If I understand correctly, the Church used to believe and teach that it was called, redeemed, empowered, strengthened, and cleansed by God. Now, I am no prophet, nor am I the son of a prophet, but might I suggest that it’s high time for God’s people to humble themselves and return to God; that it’s high time to break up the fallow ground, sow seeds of righteousness and truth, and seek the Lord while He may be found? It’s still not too late. Not even for the Baptists.

A Prayer by Sir Francis Drake

Pro-life: What it is, and what it is not…